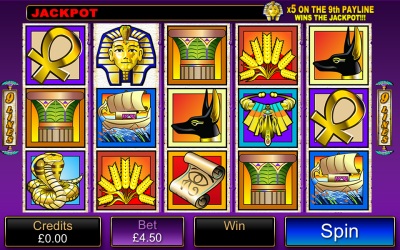 This Egyptian themed slot from Microgaming takes you right through the heart of everything associated with that date in time. It’s a theme that has been admittedly done several times already on online and mobile slots, but it’s still one that we always seem to enjoy playing. Graphically this game is sound, without ever having that wow factor.

The game has been produced as the 5 reel 9 payline slot, of which we give mixed reviews to. Whilst the low number of paylines often sets up a game to be a little limited, there have been occasions in which they can produce the most fun. Unfortunately the former is apparent is apparent with Treasure Nile. There’s no sign of any free, spins, multipliers or bonus rounds to speak of, which is a shame overall.

The Egyptian them is one that’s colourful and well designed for the most part. It may look a little dated to some, but we think that it’s got a bit of retro vibe to it and actually we quite like this. It’s not going to win any awards for design, but the inclusion of the snakes, tombs, ships and Tutankhamun make it at least feel authentic.

There’s a distinct lack of features within this game and we are hard pressed to really find much to write about for this section as a result. But it does have one saving grace and that’s because the progressive jackpot attached to the game. Granted that it’s not the biggest on the Microgaming network but it will still be pushing seven figures at its peak. You will need to collect 5 of the Tutankhamun symbols on the 9th payline to trigger the jackpot, which is a tough ask.

Interestingly, this game has a set amount in which you can spin of 4.50 coins. There’s no way to increase or decrease this amount, which will certainly put a lot of the lower stakes players off. It’s actually one of the few games to include this set amount and we actually found it to be a little constrictive as a result.