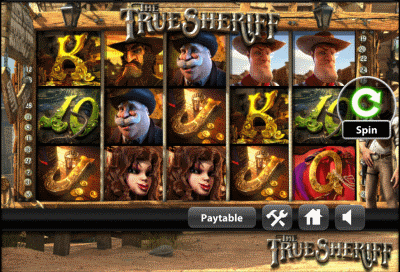 Betsoft Gaming brings its animated 3D styling’s to the American Wild West with its The True Sheriff mobile slots offering. While entertainment is always on display The True Sheriff also keeps payouts and bonus plays moving through town at a brisk pace.

This is a five-reel game, paying out on 30 lines. There is no progressive jackpot to be found in The True Sheriff but there are plenty of bonus pots to shoot for.

You’ll recognize all the characters in this frontier town – the laconic sheriff with a square jaw that fills an entire slot reel, the moustachioed gunslinger, the mysterious gambler and the majestically-dressed maiden with the heart of gold. The minor card symbols have been brilliantly forged on the town smithy’s anvil and nickel-plated. The action takes place in the peaceful town of High Noon at the entrance to the frontier jail with the sheriff monitoring the comings and goings with a watchful eye. We are told that the sheriff is “fiercely dedicated to honesty, integrity and upholding the law.” Like all western towns, even the law-abiding ones, there are six-shooters lying around to make the sheriff’s job that much harder. If you don’t recognize the theme music playing along you haven’t spent enough time watching Hollywood Westerns.

Nothing could be more fatal in the Wild West than a slow draw and Betsoft has to always dodge the same fate when its feature-heavy online slots are translated to mobile platforms. Slow loading bonus features can be neutralized with AUTOSPIN, QUICKSPIN and SKIP buttons.

When the Gun pops up on the centre reel the Sheriff springs into action plugging the reels with hot lead and turning 5 randomly struck symbols wild for a single spin while our hero holsters his weapon and mops his brow. You are showered with cascades of gold coins as a reward for stopping the prison break.

When both the Sheriff and the Gunslinger wind up on either side of the Gun it means it is time for the Showdown Bonus. There are no favourites in this duel, it is 50-50 as to who will prevail. Each gun battle is cobbled together with over twenty different scenarios to make the gunplay as theatrical as possible. If you pick the winning duellist five times before you guess wrong twice and the safety net disappears you claim the top prize as the bullet flies.

Landing three or more Sheriff’s Badges on consecutive Reels 1, 2 and 3 triggers the Free Spins bonus. That total will be between 10 and 15 spins. Each Sheriff’s Badge that is collected during the bonus play piles up for an additional prize as night turns back into day. And what a long day it was. Hat’s off, sheriff.