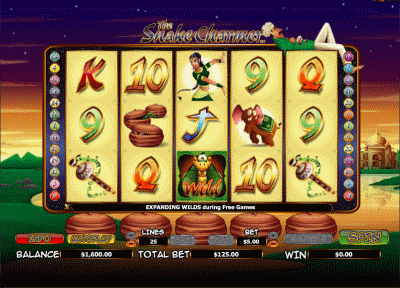 Basing a slots game on hypnosis might not be the most exciting plan a software developer has come up with. Maybe it is the danger of snake charming that is the appeal – if you look past the fact that the snakes have had their fangs and venom gland removed. But this is the world NextGen Gaming has dredged up for its mobile slots game The Snake Charmer.

This is a five-reel video slot game with 25 paylines. There is no progressive jackpot and only one bonus game hiding in the serpent’s basket. Autoplay is available to keep the reels spinning should you fall under the spell for the pungi and nod away.

Although snake charmers ply their mystical profession as street performers NextGen has set its game more in the Indian countryside outside a royal palace. Aside from the ever-present pungi a royal elephant and exotic dancer are invited to the show and are the biggest payoffs in the basic game. Traditional Indian music plays over the spinning reels.

The happy Snake is the Wild and five on a payline can return 5000 coins. It also can substitute for any of the other icons and create winning combinations. But the segmented serpent plays an ever larger role – literally – in The Snake Charmer’s only bonus game.

The Snake Charmer is the game’s Scatter and three or more anywhere on the reels will unwind ten free games. Before each spin one or more snakes may randomly wiggle out of the basket resting beneath each reel and expand to cover all positions on the reel to almost guarantee wins. The snakes do not dance in front of the groovy gyrating circles before every spin but it should happen more often than not during the freebies. The free spins can not be re-triggered. Other than that, the lone feature is a real charmer.