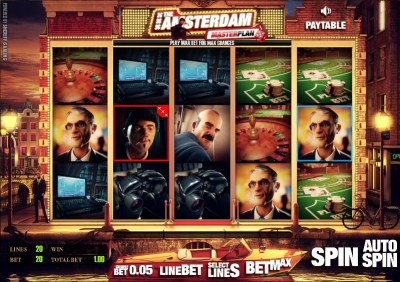 When they asked career bank robber Willie Sutton why he kept robbing banks his answer was simple, “Because that’s where the money is.” Ever since Danny Ocean and his fictional gang of high-end thieves started knocking over casinos in the movies in the 1960s the meticulously planned casino heist has been a staple of Hollywood entertainment. Sherriff Gaming has given its version of the grand heist in the atmospheric 3D mobile slots game it calls The Amsterdam Masterplan.

This is a five-reel game that pays out along 20 possible paylines. You can get in on the heist with just 0.01 coins and bet up to 50.00. There is no progressive jackpot, just the one that the boys are after by knocking over in this casino.

The target of the heist is a casino operating on the banks of the canals in Amsterdam. Simon the Brains has been casing the joint for months and with the help of Harry the Insider and Chung the Technician the team is ready to ignite their nefarious plan. The normal low-value playing cards have been silenced and replaced with casino scenes like gaming tables and security monitors. We watch the goings-on from the lamp-lit street with binoculars waiting for the chance to penetrate the interior of the casino and reach the vault. A getaway boat is parked in the canal. Meanwhile as the reels spin Simon the Brains continually shouts “Bingo” for every win which is all very confusing since there is no bingo being played. It’s all part of the Amsterdam Masterplan.

Free spins and bonus games are the preliminaries to the big heist. The Casino Entry Ticket triggers an Expanding Wild when it lands on the centre reel. As all the grids turn wild Chung the Technician is revealed to be dropping from the ceiling. The game is on.

The Spin icon is a frequent guest tot he reels and when it lands exactly in the middle position of the fifth reel it activates the Wheel of Fortune. The Wheel determines a multiplier up to 250X your stake – how does that sound?

When the three conspirators come together in sequence on a payline in Reels 3, 4 and 5 it signals an Extra Cash Bonus and Simon, Chung and Harry throw cash at you to whet your appetite for the big score. But are we any closer to getting inside the vault now that the guys are all together?

Be patient. The Bank Vault that is your obsessive goal is the Scatter and it will require three or more anywhere on the reels to get inside with five spins to gather up as much cash as you can with the boys. Four Bank Vaults give you 10 freebies and five enable you to pull cash from the casino bosses for 15 free spins. Like Simon the Brains, says, “This is It.” If the Bank Vaults come back three times during the bonus your time inside the cash grab will go on even longer.

If the haul of your criminal life is not enough to slake your greed there is also a Double Up feature where you can double your haul with the turn of a card. Grab all you can and get to the boat.