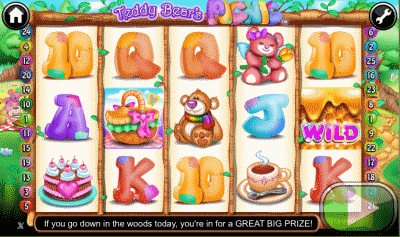 In 1902 United States President Theodore Roosevelt, a celebrated big game hunter, was on a bear hunt in Mississippi. After three days the President had spotted nary a bear. His worried hosts tracked down an old bear on the fourth day and tied it to a tree for Roosevelt to shoot and bring success to the expedition. He declined to do so as it would not be sporting and when cartoonists learned of the incident the world then had Teddy Bears. A century later this is what the noble bears have come to – picnicking in the woods in this mobile slots game from NextGen Gaming.

Teddy Bears Picnic is a five-reel game with wins available on 25 paylines. Play begins with as little as 0.01 coins and big time eaters can pony up as much as 1.00 coins for a seat at this picnic. There are no jackpots and no multipliers to be figured out in the game, just free spins to chase after.

This is not a picnic for meat-eaters. These bears are cute and fluffy and dressed in nothing but pastels. The menu leans heavily to the cakes and pastries and winning lines are identified by trails of frosted doughnuts. Even the minor playing card symbols are sugary and look good enough to eat. Hearts are the order of the day and anywhere they can be put to use in this woodland they are.

It is not that these teddy bears cannot get into a little mischief that may bring you some extra rewards. There is a impish bear who can pop up any time and throw a sticky Honeycomb Wild onto the screen, doubling the value of the Wilds in the process. Five of those Wild Honeycombs will bring the biggest award in the game of 500X your bet. The Honeycomb will substitute for all the other symbols except for the Picnic Basket, which is the Scatter.

The Picnic Basket pays a more modest 100X your stake when five stuffed with goodies arrive at the picnic site. But more importantly any time three or more Picnic Baskets appear it triggers the Sticky Honey Free Games bonus. The next eight games are on the house and any Honeycomb that shows up on the reels will stick around for all the remaining free spins. That is a whole lot of frosted doughnuts at the picnic. The gooey free games bonus can not be re-triggered before returning to the basic game.

There is one last surprise in store from this adorable collection of sweet-toothed bear cuties. They love to gamble. Before you leave the picnic you will get a chance to double or even quadruple your latest winnings on the turn of a card. Win or lose, take a doughnut with you for the road.