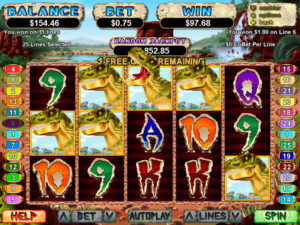 Lovers of dinosaurs sometimes wish scientists would just put away their microscopes. When Tyrannosaurus Rex was named in 1905 it was because he was the king tyrant of all the giant lizards. Top of the food chain. The biggest and baddest land predator that ever lived. Now scientists tell us T-Rex was more of an opportunistic scavenger type. Think prehistoric hyena or coyote. As we were told in The Man Who Shot Liberty Valance, “When the legend becomes fact, print the legend.” And so Real Time Gaming has done with its mobile slots game, T-Rex, where our protagonist has been restored to the dinosaur you would least like to meet in a jungle clearing.

T Rex is a five-reel mobile slots game that conceals wins along 25 pay lines. You can stir up the creatures of the primordial jungle with  just 0.01 coins and wager up to as many as 5.00 coins per payline so as much as £125.00 per spin can be risked. There is an Auto Play feature to keep the action stirring. A progressive jackpot can be won at the conclusion of any game. It is triggered at random and wins are added to any previous successes.

T-Rex is set in the long ago world of active volcanoes when dinosaurs ruled the land. The T-Rex is joined in the jungle by a golden Stegosaurus, a crimson Triceratops and a huge armoured Ankylosaurus. None look like a tasty meal for all but the most ravenous T Rex. The minor playing card symbols have all been chiselled out of stone, maybe down at Mr. Slate’s quarry by Fred Flintstone. Audio effects place you in the heart of the prehistoric land – at least until scientists tell us dinosaurs had no ability to make sound.

T-Rex is obviously king of the prehistoric jungle and he plays the Wild. He is mostly an absent ruler, however, since he only appears on Reel 3 during normal play. Still, he will help out where he can to form winning combinations by substituting for other symbols and doubling prizes when so doing. This can make four Stegosauruses and a T-Rex in the middle of the payline worth the top in-game prize of 10,000X your stake.

T-Rex can return the same amount but only during the Free Games feature. This lucrative foray into the jungle is triggered by the Hatching Egg that is the Scatter. When three or more Hatching Eggs spin onto the reels it triggers a Pick Me game. Select each Egg to reveal up to 10 free games per Egg.

During this bonus play the tyrant king really gets busy. When T Rex appears in his normal lair on Reel 3 he commences to gobble up every other dinosaur on the screen and replace them with clones of himself. With all the new Wilds in place your wins are re-calculated before the next spin. In addition T Rex is now roaming free around all the reels and if five align on an active payline that is when he is worth 10,000X your initial wager. And the Free Games feature can be re-triggered. Now that is a powerful lizard, don’t go calling T-Rex a scavenger.