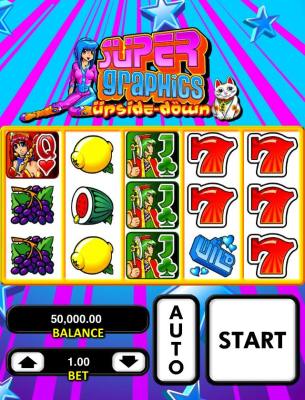 Realistic Games did nothing dodgy in its naming of its Super Graphics Upside Down mobile slots game. There are somewhat super graphics and the game certainly does flip upside down.

This is a five-reel game with 20 chances to win on its paylines. There is no progressive jackpot but one bonus game with a maximum bonus of 10,000 coins.

Super Graphics Upside Down envelops you in the world of Japanese anime. There is a host of manga-influenced graphics that fans of the genre will embrace and the minor card value symbols are given full manga treatment. Your hostess for the action is Satsuki who speaks in Japanese but English subtitles are provided if you are not one of the 125 million or so fluent in the East Asian tongue. The game is set within a larger frame to allow the reels to revolve but this feature on tablets is dispensed with on smaller phone screens to always give you a good look at the action. The hard-charging soundtrack keeps the anime lively.

Super Graphics Upside Down plays out with traditional fruit symbols and the highly-stylized face cards. There is an Autoplay feature and all the trappings of a traditional fruit machine. So when do things get all topsy-turvy?

The “WILD” symbol – again graphically enhanced – is the Wild and the Super Graphics logo is the scatter. Three or more scatters trigger the Bonus of 15 free spins. Blue-haired Satsuki leaps into the screen and sticks a perfect landing to introduce you to the coming “Revolution” with its promise of good fortune. The game slides back and turns upside down before returning to play. But no need to flip your phone around – you should be able to handle that half-watermelon now facing to the right instead of the left and the bug-eyed Queen appearing on her head.

One effect of the transition is that the abundance of big scoring symbols that often seem to tantalize by falling uselessly on Reels 3, 4 and 5 are now producing awards on the first three reels. Satuski gives endearing calls of encouragement as the Bonus continues and heartfelt congratulations on big payouts. Thanks Satsuki! It is possible to re-trigger further sets of free play in the Free Spins Bonus round.

That is the gimmick. Whether you think “seems it is great” or not will probably depend on how thrilling you think it is to see a plum upside down.