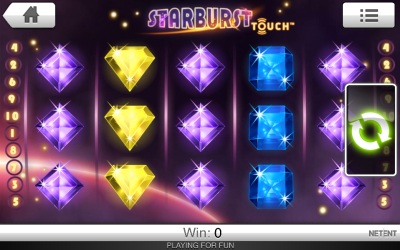 The Starburst slot is without doubt, one of the best looking mobile slots we have come across to date. It’s very much tailored towards those classic games such as Bejewelled and even the likes of a modern day Tetris, of which we all know about their popularity.

The slot contains a 5 reel, 10 payline feature which includes a free spin game but a multiplier of just 1x. Its pay-out reaches a maximum of 2,500 coins, making it pretty small in comparison to most NetEnt slots.

So the theme for Starburst is definitely along the lines of a jewel burst of colour. The games look absolutely stunning, and in mobile form it loses nothing of its originality and design. The colours of the jewels within the slot are without doubt the showstoppers and it’s these that really make this a standout mobile slot.

The theme could almost be described as a little retro, with a bit of disco/funky vibe going on. NetEnt says it’s one of their few arcade style slots, and we would have to agree with this and the fact it’s fast paced and energising.

It’s always surprising when reviewing any NetEnt slot to see ones which carry very few features, but unfortunately Starburst will likely fall into that category. Most notably though is the lack of a free spin game. So whereas with most mobile slots you will be taken into the free spin game once you’ve collected the required number of scatters, Starburst actually uses a drop and hold feature which means lines are held and then re-spun. The amount of times will range between 1 and 5 with a potential multiplier of just 1x that amount.

What you will find from this slot is that these holding scatters will be quite frequent as you play, meaning that your pay-outs will be often, if a little small. It’s defiantly a low variance slot if ever there was one, but that shouldn’t really take away how much fun this slot can be.

The design is definitely where Starburst Touch stands out. There are few better than this vibrant, exciting mobile slots on the market and that’s really a credit to NetEnt more than anything. They obviously purposely decided to keep this pretty stripped back in terms of features, and whilst we would possibly argue that it just needs something added to it, the game never really feels boring at any point.