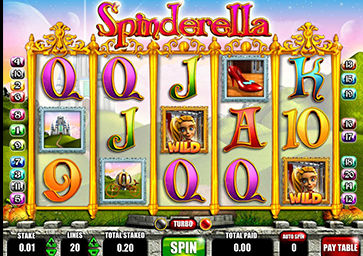 The Little Glass Slipper is a European folk tale that dates back into the 17th century and has antecedents in ancient Egypt where a Greek slave girl is rescued from her dreary lot in life by the king of Egypt. The story was popularized by the Brothers Grimm and many variants have been woven around the world. Here Mazooma has spun the tale in its mobile slots game Spinderella.

Spinderella is a five-reel mobile slots game with 20 pay lines to reward players. You can start the tale with just 0.01 coins. The Fairy Godmother has chosen not to grant a progressive jackpot but dangles a possible £25,000 in-game jackpot. There is an Auto Play option available that can be set to any number of plays desired; it can be disabled with a tap. Turbo play can be engaged as well.

If you cannot guess the theme and symbols involved you may have missed a childhood. There is a red glass slipper and a pumpkin for props. A magic carriage is at the ready to whisk golden-tressed Spinderella to the castle where the prince of her dreams awaits to satisfy her every need and want and lift her from her trapped, dull life. Maybe this tale needs a spot of updating.

This is Spinderella’s show from the very first spin. She holds the key to that massive jackpot. When she fixes her hypnotized eyes across an entire payline she will return 10,000X your wager. By contrast even Prince Charming returns only 500X your bet.

Spinderella is also the Wild and she will substitute for all symbols except the Fairy Godmother that is the game’s Scatter. If she has created a winning combination it can be juiced by as much as 10X your stake, depending on how many Spinderellas are involved in the prize.

The Fairy Godmother icon will trigger the Free Spins bonus when three, four or five appear. Free spins are played at the same number of lines and wager per line as was in effect during the triggering game. You will be transported to the Fairy Godmother’s cottage where she awaits with her magic wand and a giant double spinning wheel. One spin will determine your number of free spins and the second wheel will designate which of the Spinderella icons will assume the role of a Bonus Wild. The new Wild assumes the same powers as Spinderella and can multiply wins up to 10X. And you won’t have to worry about that carriage turning back into a pumpkin.