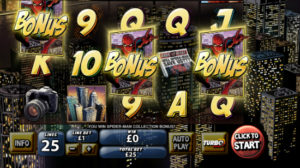 Marvel Comics is known for its superheroes but its flagship character since he appeared in 1962 has been The Amazing Spider-Man. Playtech has the rights to adapt Marvel characters for its slots games and Spiderman – Attack Of The Green Goblin is a 2014 release to mobile.

This is a five-reel slots game with 25 paylines. There are seven bonus features but your biggest wins may come from multipliers in basic play or one of the four jackpots that are part of the Marvel progressive jackpot system that links all Marvel slots players. It can trigger at any time and with any amount bet although you surely have a better chance when using Max Bet. You are presented with a 25-space grid and three selections when triggered. If you match up three jackpot symbols you are the winner.

If Spiderman is not the most popular superhero of all time he is in the top three with Superman and Batman so you know what you are getting when your mobile device screen comes to life with Spiderman – Attack Of The Green Goblin. There are the lighted skyscrapers of a New York City night, a folded copy of the Daily Bugle, photographer Peter Parker’s camera and all the major players: Spiderman, the Green Goblin and an especially wicked looking Mary Jane Watson.

First of all Spiderman is not hanging around on the outside of the reels for no reason. In the Spidey Snapshot Feature every once in a while he will swoop in and get caught in a camera shot which will pay you a coin multiplier of between 3X and 10X your total bet.

In the Spider-Man Wild the superhero will randomly shoot off a web that will immobilize two, three or even four reels which will make those reels completely wild for your next spin.

While both these basic play features can be profitable the main bonus feature is reserved for the Spider-Man Collection Bonus. it is triggered by the appearance of the Spider-Man Bonus icon on Reels 1, 3 and 5. Five comic books then fly off a shelf and you click one to play that bonus. Your choices include:

Hot Zone Free Games: An award of 20 free spins with reels packed with extra wilds provided by Spiderman who does the shoot-web-and-make-wild thing at symbols which remain wild for three games. If the Green Goblin is lurking he will deliver an extra 2X multiplier.

City Chase Feature: You are now swinging through the darkened city navigating by web as you chase the Green Goblin. As you go you are picking up cash prizes and multipliers that will continue until you encounter the “Collect” button.

Rivaling Free Spins: Here you start with a 1X multiplier and ten free spins. Don’t count on that staying the case if your Spidey sense is correct. If the Spiderman icon shows up on the centre reel the countdown game counter will stop – potentially forever. If Spiderman shows up again on Reel 3 the multiplier will increase by 5X. Only when the evil Green Goblin appears will the multiplier be reset and the countdown of free games to zero continue.

Radioactive Free Spins: This a bonus with 15 free games and a green Radioactive Spider on Reel 3. If it shows up it is a Wild and it will also infect random symbols on adjacent reels and turn them Wild.

Ultimate Fight Feature: Spiderman and Green Goblin are clashing on the roofs above New York City. You have a choice of five cobweb symbols that will determine the outcome of the fight. You will win coins regardless of the denouement but if Spiderman wins you win more. Is he strong? Listen, bud, he’s got radioactive blood.