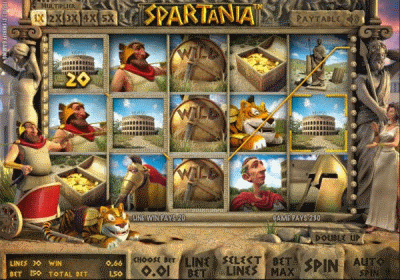 You cannot call yourself a mobile slots developer without a Greek civilisation game in your arsenal and if, like Sheriff Gaming, you invent a place like Spartania you can feel free to mix all sorts of ancients into your world with impunity.

Spartania is a five-reel slots game with wins along 30 different paylines. Play can commence with as little as 0.01 coins and wind up with a maximum bet of 150 coins per spin. There is no progressive jackpot and no free spins but imaginative bonus games to fill your coffers with gold.

The theme is ancient times, whether that be Greece or Rome or Carthage. There are armoured war elephants at hand that would suggest the wondrous Carthaginian commander Hannibal, there is a Colosseum that suggests the Roman empire and there is the Spartania name that suggests Greece. Into this rich stew of antiquity are tossed plenty of shields and helmets, a tiger-driven chariot and a female temptress who blows around kisses and greets big wins win Britney Spears-like exclamations of “Cool.”

The most beguiling feature in Spartania takes place before every spin when a random multiplier flashes between 1X and 5X for any subsequent rewards in that game. Far and away the most valuable symbol in basic play is the Chest of Gold which will produce a win of 500X your line bet for five across a payline to build a possible win of 2500X your stake.

The multiplier stays in effect should your spin trigger a bonus game, of which there are two. Three or more Queens trigger the Feature Bonus in which you retreat to a room deep in the bowels of the Colosseum for a Pick Me game with a Roman warrior who you help select prizes from 28 golden coins laid out on a wooden table. The brute grunts a great deal and pounds the table to pull the prizes from the coins. You continue building your bank until you direct the warrior to hit a “Collect” coin which displeases him tremendously. The multiplier is applied to your bonus total and back to the reels you go.

When the stone Spin wheel appears on Reel 5 in the centre position – and nowhere else – you trundle off for a turn at the Wheel of Fortune. Again your winnings will be increased by the multiplier you had when the game was triggered. The Queen is around again to pull the lever on the wheel.

The Shield and Sword symbol is the Wild in Spartania and it substitutes for all the other symbols in the game. And at random it will expand to fill an entire reel, greatly enhancing your chances at making winning combinations. And exciting the tiger who jumps in his harness.

There is also a Double Up option that can apply to any wins captured in a spin. So you could take your possible 2500X stake and make it 5000X. That’s the kind of coin that will spend handsomely in Greece or Rome or Carthage or wherever.