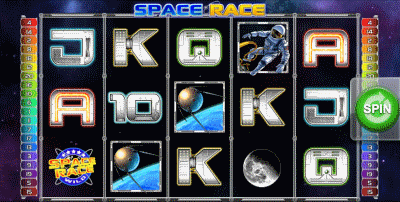 The race to be the first to land on the moon captivated the imaginations of the 1960s and once it was accomplished nearly 50 years ago no one has seen much need to go back again. it is those heady days of space exploration that Play’n Go seeks to capture with Space Race.

This is a five-reel mobile slots game with 20 paylines. Anyone can join the Space Race with just 0.01 coins staked on a single line. Those with a bit more adventure can bet 20 lines up to 0.25. There is no progressive jackpot but revolutions are your goal along with bonus games.

Space Race takes you back to when science fiction became reality. There are satellites and space capsules, a nicely detailed Moon icon and a look back at an illuminated third rock from the sun. There are also loads of meteors floating about the space scape that we will meet later. There is an astronaut out for a spacewalk and the music is appropriately otherworldly. Even the minor playing card symbols look as if they were decals on a rocket ship.

You know the Rocket Ship is the bonus trigger here because as it flies through outer space it is accompanied by the word “Bonus” on top of it. When three or more of these icons appear anywhere on the reels the Moon Landing Bonus Round is triggered which starts the boosters on one of the capsules firing and it launches clear off the reels.

Your goal now is to land on the moon safely by avoiding meteors and other space junk flying all around the capsule. You are presented a series of ever-shrinking grids in which to dock the spacecraft as meteors explode onto the grid in random orange bursts. if your ship is struck it will lose a safety shield. A second strike by a meteor thus ends the game and you collect your award before returning to the reels.

The Meteor Shower is the Scatter and all wins are multiplied by the total number of coins staked and added to the bank on board. The neon red Warning Sign activates the Free Spins in Space Race. There are 15 of them and they will not re-trigger as we have to get on with the race. The Warning Sign does stick around however to become an extra wild during the freebies and meteors flash through the reels after wins making the reels themselves shake. In the end the real race in space is just to avoid being clobbered by those rampaging meteors.