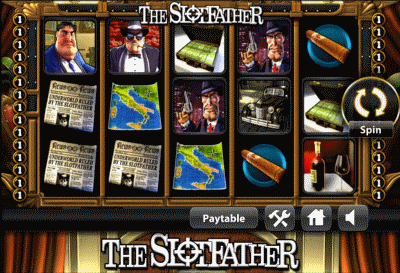 For the Slotfather, it is all about the business. This crew is into the coin count, not the body count in this fast-paced Mafia-themed 3D mobile slots game from Betsoft Gaming.

The Slofather’s adventures play out on a five-reel game that pays on 30 win lines. There is no progressive jackpot and no big in-game jackpots, legal or illegal, to go gunning for. Most players will reap rewards in the imaginative bonus games that have infiltrated the Slotfather’s world.

You are invited to join the Slotfather’s animated gang of henchman to bring back money and perhaps make a little scratch for yourself – “You’re a good earner, kid.” Each of the Slotfather’s hand-picked entourage has been chosen for a specific skill, yours is to manage the slot machine business. Along the way you will be exposed to the trappings of Mafia life that have replaced the normal playing card minor symbols – pinky rings, fine wines, expensive cigars, and pasta bowls overflowing with marinara sauce (hey, it’s Fat Tony’s favourite). If you forget just where you are there are maps of Italy and newspaper headlines to clue you in, if the accompanying strains of the Godfather Trilogy-inspired soundtrack don’t do it for you.

Betsoft has packed The Slotfather with bonus games that give you an idea of just how many streams of revenue this mob boss has going. Sammy Quickfingers is running one of the most common scams – when he shows up on either side of a suitcase he will quickly dip his hands into the valise and toss you out some instant cash in the Sneeky Instant.

Fat Tony The Underboss is one of the busiest characters in this Slotfather saga. He is the Scatter that triggers bonus money when he combines with other symbols and when he shows up three, four or five times on the reels he awards 50, 100 or 200 credits.

Things do not always run smoothly in the Slotfather’s empire. When those rough patches occur it is time to call in Frankie “Da Fixer” who arrives with tires screeching and gun fire flashing in a 1927 La Salle. When Frankie appears on either side of a Tommy Gun he blasts the screen to smithereens and you are left with nothing but a pattern of bullet holes. Pick one to reveal free spins and multipliers up to 3X.

Sometimes the Slotfather has no choice but to get his own hands dirty. When he shows up three times it is, of course, for the offer you can’t refuse. You are sent on a mission to place his slot machines in the best downtown businesses. Pick three and watch coins and cash spill into Slotfather coffers. And yours. Beautiful.