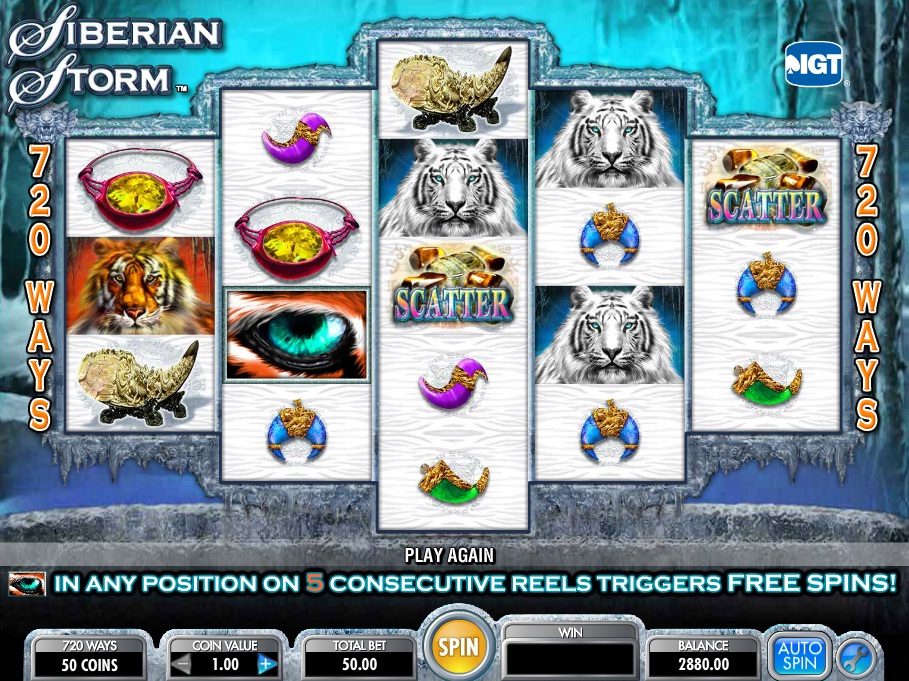 While a slots game based on a Siberian storm where the winter temperatures average ten degrees below zero and can reach ninety degrees below does not sound a pleasing premise this mobile slots game from IGT is about tigers.

Siberian Storm is a five-reel slots game…and a four reel game and a three reel game. The five reels are in the center and the configuration feathers out to three on the ends. With Multiway Xtra there are 720 ways to win. You can start the reels growling with a single coin or bet up the 20. There is also an Auto Play option.

The play in Siberian Storm takes place against an icy backdrop but the pair of hirsute tigers – one brilliant orange and the other a spectral white – don’t mind at all. Most of the rest of the symbols are an assortment of Tiger’s Eye gemstones.

On the pay table the orange tiger pays 400X your bet for five on a payline and the white tiger pays 300X. The top payer, however, will be the Siberian Storm Title Card with an award of 1000X your initial play. All MultiWay Xtra awards pay left to right or right to left but only the highest paying combination for each symbol is paid per spin.

The real green Tiger Eye triggers the Free Spins bonus. Five green eyes in any position on five consecutive reels activates an award of eight free spins. If more than one combination per spin awards free spins the sum of the spins for all the winning combinations is awarded at once which can earn up to 96 free games right from the get go of the bonus.

During bonus play only the bronze Tiger Eye appears, If it peers out ominously fro five consecutive bonus reels an additional eight free spins are awarded and you can run that total up to 240 free spins. The reels are different during bonus spins with extra Wilds and Scatters but there are no multipliers applied.

A special Tiger on a purple background is stamped with a WILD indicator and it will substitute for other symbols in the hopes of creating a winning combination. The Wild can stack but only appears on Reels 2, 3 and 4. Similarly the Scatter is spelled out for you and it awards multipliers. Three anywhere on the reels will double your bet, four will pay 10X and if five Scatters thaw out of the ice onto the reels the award is 50x your bet. That will get you through any Siberian storm.