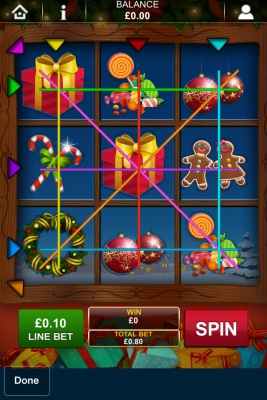 Everybody loves a Christmas themed mobile slot, and we are no different! Santa’s Gift provides everything that we love about this magical time of year and whilst it’s a pretty simple slot, the games offers a warm and glow that most slots simply don’t. That may just be the cheesiest thing we have written, but it’s true!

The game is simplicity personified and includes a 3 reel, 8 payline game, which is not too dissimilar to some of the smaller games that PlayTech have created in the past. Unfortunately, features aren’t a massive part of this slot with just a host of scatter symbols and a medium jackpot to look out for.

Santa’s gift requires you to play though the game searching for all things Christmassy. These include everything from bells, stockings, ginger bread men, baubles, stars and various pieces of candy. The design is probably the standout feature and it just looks so smooth and warm on the smartphone. Interestingly, it’s one of the few mobile slots that we have tested that actually works in portrait mode, which is actually a rare concept for most slots.

So the features on the slot are pretty much where Santa’s Gift starts to fall away. Some would argue that the features are what makes a mobile slot, and we would agree to a point although we have tested some with limited features that have actually been really good fun. The scatter symbols are the gift wrapped red boxes and these will be in play within any section of the board.

The part that’s going to give you the biggest payout is the tracking down of the golden star. If you manage to land on this symbol then your bet will be multiplied by 100 times. Now the max bet goes up to 8 coins, which makes the maximum jackpot just 8,000 coins and this is definitely on the low side.

It’s hard to get away from the novelty factor of Santa’s Gift. Aesthetically, the game looks great but the lack of features makes its longevity comes into question. Even after playing for just 15 minutes or so we found it becoming a little tedious. This mobile slot may only really come into to its own for people who simply love Christmas and can’t get enough of that holiday period. For others, it’s likely going to be that there is something else out there which you can play for similar money, but for much increased longevity and also bigger potential paydays.