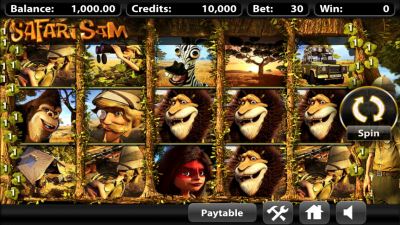 Safari Sam is BetSoft’s entry into the crowded field of African adventure-based mobile slots games. As with many of its games this one seeks to stake out its territory with a narrative of a cartoon hero, in this case an English big game tracker named Sam.

This is a five-reel spinner that pays on 30 win lines. There is no progressive jackpot linked to Safari Sam players but the game accommodates larger bets for bigger scores during basic play and an in-app jackpot amount of 2,500 coins.

This is not a shoot-and-kill African safari but more of a look-and-see animal hunt. There are no guns on display but binoculars and trail jeeps and tent sites are in evidence. Truth be told, if Sam seems to be stalking anything around the lily pond-speckled savannah it would be the comely native girl who teases him from behind a manketti tree and swings down on him from the treetops on a vine. When you help Sam find an animal she is on hand to offer congratulations – or, tricky minx that she is, is it a sarcastic encouragement since he never spotted her?

BetSoft has left traditional minor playing card symbols way in its rear-view mirror for its graphic-rich slots so the screen is packed gutter to gutter with 3D carnivores, primates, herd animals and the humans who pursue them.

There is never anything predictable about a big game hunt. At points in play a Random Multiplier between 2X and 10X will pop out of the screen and deliver that award.

If three of the same symbols appear stacked on the same reel the symbols will crumble to the bottom. The Collapsing Symbols then pay out the award of the deflated symbol. New symbols arrive to once again fill the stricken reel for another chance to win. Only then will the safari resume.

When Safari Sam stumbles upon a nature lover’s dream and can see a Gorilla, a Zebra, and a Monkey all next to each other on Payline 1 the Wild Animal Free Spins bonus is triggered. You decide from among the trio which one you want to be wild for 10 spins. That animal then replaces Sam on screen and all game winnings are doubled until the round plays out.

When three or more Safari Sam symbols appear on the reels the man is clearly looking for something. In this Safari Bonus Round you head for Sam’s tent to help him scout out the region. You study his map and decide which of three areas to go to look for animals. Then you pick from among a tree, bush or rock as sighting locations until your bonus award is revealed.

You also can enter Sam’s tent after every win to attempt to double your bounty with a spin of a coin. There is clearly plenty to see on this African safari, maybe so much as to distract Sam from remembering that when the scantily-clad female bush woman introduces the game she does so brandishing a wooden spear with a malevolent look in her eye. Who is the hunter and who is the hunted here, Sam?