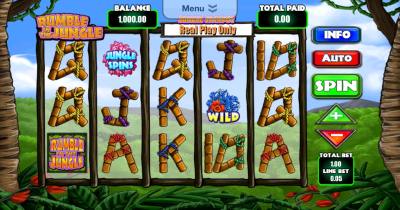 Fight fans will need to take a moment to regroup when they discover that this Rumble In The Jungle has nothing to do with Muhammad Ali and George Foreman but just takes its name from the famous championship bout in Zaire in 1975. Instead Openbet gives you a wizened monkey and a parrot and a misunderstanding over a banana.

This is a 20-payline game played out across five reels. At the top of the Win Plan chart is a 500X payout. An Auto Spin options lets you take in the jungle ambiance while the app takes over for 10, 20, 30, 40 or 50 whirls in a row. When you want to invigorate the pace a Turbo option is also available.

Parrots and their chirpy calls welcome you to the tropical jungle. No one seems mad enough at anyone else to raise a loud argument, let alone a rumble. Press the SPIN button and the calming jungle sounds erupt into something of a Calypso beat. A human presence is announced by the minor card value symbols that have been cobbled together with pieces of bamboo and rope. Or maybe the monkey did that.

When three or more Parrots appear you are elevated to the forest canopy for a little bird watching. The number of brightly coloured parrots that arrive above the treetops for the bonus is determined by how many Parrots triggered the round. Pick one of the hovering psittacines and get awarded a bonus multiplier of between 3X and 8X.

Jungle Spins Bonus wakes up the jungle with five free spins awarded when the Jungle Spins symbol stops three or more times on Reels 2, 3 and 4. While in Jungle Spins mode the Rumble In The Jungle pays 2X, 50X, 150X or 250X. The object of desire here is the coveted Banana scatter symbol that pays off the Jungle Jackpot when five scatters fall from the trees.

The Jungle Jackpot is also available in the Monkey Bonus that is triggered when a bunch of Banana scatter symbols numbers at least three. Your monkey host announces impending excitement by splattering his banana right onto the screen. Real monkey shines. You are escorted to a new clearing in the jungle where the gracious monkey orchestrates a three-reel game where jungle animals come to the clearing bearing coins. The reels continue to spin until you have collected three rotten bananas at which time the total is awarded. Should you gather three Golden Bananas before that, however, you win the Jungle Jackpot. Imagine. All that action from the Rumble In The Jungle and a punch was never even thrown.