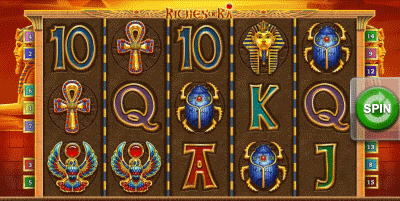 In Egyptian religion all forms of life were created by Ra, the sun god. Human beings were the result of his tears and sweat. Ra was one powerful deity but one thing he did not seem to spend a bunch of time creating was riches. Leave that oversight to be rectified by Play’n Go.

Riches of Ra is a five-reel mobile slots game with 15 paylines. Wagering begins at 0.01 coins and goes to 0.25 coins with bets of up to five per line. There is no progressive jackpot created but there are multipliers and free spins to warm the sunny hearts of slots players.

Luckily for all the slots developers clamouring for an Ancient Egyptian-themed game the civilization on the Nile was rich in characters both real and worshiped. Here Ra is Play’n Go’s entry into the genre. He was most often depicted in hieroglyphics as having the head of a falcon upon which is perched a glowing red orb to represent the sun. Here the solar deity is impressively rendered along with the expected trappings of the Egyptian world – pyramids, Sphinxes, scarabs, Ankhs and the like. The reels are bathed in red and yellow lights that effectively evoke the North African desert and do justice to the Egyptian-tinged score.

Ra’s biggest time on stage comes courtesy of the Stacked Wilds feature. Ra is the Wild and during basic play he is only given a head shot but if he becomes stacked on reels 1 and 5 he is transformed into full body with a blazing sun overhead. He holds his pose for 15 free spins, keeping the two reels entirely wild. As wins are created one after another they are greeted by flashing sunbeams and multiplied by the amount staked on each line.

Next to that helio-spectacular performance the Riches of Ra’s only other bonus feature can seem sort of tame. it is a simple Pick Me bonus when three colourful urns appear on the reels. But do not hide your eyes from the riches within that can win up to 150X your total bet when the correct urn is selected and its top popped.

Ra does not object to creating a few more riches with a pure Gamble feature that enables you to double your most recent win with a turn of a card and guessing red or black or even quadruple your bank by correctly predicting the upcoming suit. After all Ra spent a good bit of his time traveling the underworld as well where these types of shenanigans were accepted behaviour.