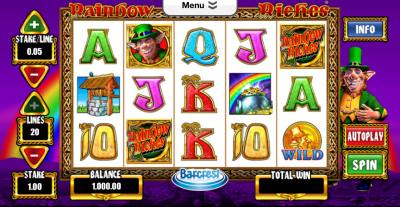 Barcrest went into business in 1968 and soon became a major player building and distributing fruit machines throughout Great Britain and beyond. When the company entered the online universe it developed Rainbow Riches in 2006 that became a runaway hit and one of the most popular slots ever created. It spawned a franchise that led the game to mobile and undoubtedly any format waiting in the future to be invented.

Rainbow Riches is a five-reel; 20-payline mobile slots game. There is no progressive jackpot to be chased but that pot of riches at the end of the rainbow can be substantial. Does 500 times your stake get your attention?

Barcrest doesn’t stray far from its winning pub room template with Rainbow Riches. There is nothing unfamiliar here to those who have spent time dreaming of riches – an Irish leprechaun to show you the way, roads paved in gold, a wishing well, a solid gold coin and the pot of gold under a rainbow. The lively Irish jigs playing in the background almost demand you to keep spinning.

Rainbow Riches is calibrated to any level of punter with a wide range of stakes. Autospin is available. There are no free spins but three bonus games to luck into. The good-timing Leprechaun is never far from the action and will host a couple of bonus rounds himself.

The Wishing Well Bonus activates when three or more Wishing Wells spin into view. Pick one and it will reveal a multiplier up to 20X that will advance your original wager.

If you gather three Leprechaun scatter symbols you will meet him again at the bottom of the hill staring at a serpentine path to the pot of gold. The mischievous one will spin a wheel and each time it lands on a number between one and six you move up that many steps towards the gold under the rainbow. Each step has a corresponding multiplier up to 200X at the pot. You keep spinning and climbing the road until you hit one of the two “collects” on the wheel at which time the multiplier you are standing on is banged against your stake. Up we go!

Three Pots of Gold in Reels 2, 3 or 4 trigger the Pots Of Gold Bonus. Again the Leprechaun is waiting for you, This time he is perched on a boulder in a mountain-ringed meadow with a dozen pots of gold all around him. He starts dancing a jig and the gold starts spinning. When he finishes the pot between his toe-tapping feet is your multiplier. The least you can massage your stake with is 50X, the most 500X. And that is why the Leprechaun is one of gaming’s most familiar faces.