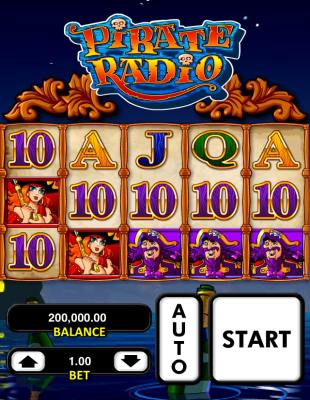 Say “pirate radio” to all but the youngest mobile slots players and what is likely to leap to mind are a group of renegade disc jockeys in the 1960s who boarded ships to float into the North Seas and illegally transmit signals to the  Radio Caroline station back in Britain. Their mission was to play rock music without the shackles of the record companies and the BBC. While that pirate radio might make an interesting canvas upon which to build a slots game – radio equipment, rock and roll stars, drilling platforms, ships – Realistic has chosen a different tack and based Pirate Radio on the high seas adventurers of yesteryear.

This is a five-reel, 20-payline game without a progressive jackpot feature. But extra spins and multipliers can stuff your treasure chest to overflowing within the app.

Pirate Radio drops you into the galley of a wooden pirate ship. Scattered about are swords and blusterbusses, coils of rope, wooden stave barrels, and treasure maps. The treasure chest is shut tight. Ready to be filled? Or ready to be buried? Pictures hang on the wall of buccaneers and pretty ladies. And the radio in all this? Well, the rockin’ skull in the skull-and-crossbones is wearing his headphones. He is probably listening to something a bit more edgy than the jaunty calliope music playing in the background of Pirate Radio. These are tunes that never would have infiltrated Radio Caroline.

Pirate Radio pays for consecutive symbols on two, three, four or five symbols. After selecting your number of line plays the amount of your stake on each line can be increased or decreased easily with arrows. Autoplay is available.

Jolly Roger is the wild and the Treasure Chest is the scatter. The Free Spins Bonus is triggered by three or more Treasure Chests and sends you to another part of the ship where two turntables await – are you feeling a bit more of the “pirate radio” now? The red-labeled vinyl record delivers your free spins, 12 different numbers between 5 and 25. The blue platter determines your multiplier – most likely two, three or four – but you have one chance in 12 of getting a 6X.

If Jolly Roger assembles his entire crew of five on a win line you can play the Pirate Bonus Round. It is more of the same, free spins but the parameters of the bonus are fixed. You receive 10 free pulls and all 20 win lines are activated for each. If you trigger the Pirate Bonus Round during the Free Spins bonus your multiplier is in effect. That could result in enough booty to make any rogue broadcaster go legit.