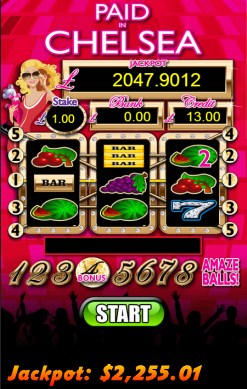 At Alchemy Bet the word play is as spirited as the mobile slots play and so it has come to pass that the British reality television series Made in Chelsea has wound its way into the hands of slots players as Paid in Chelsea.

This is a three-reel, five win line slots game. There is a progressive jackpot that could turn heads even in Chelsea and basic play includes nine play levels and a glitzy bonus.

There is quite a lot of pink on display in Paid in Chelsea, from the champagne to the wardrobes. Alchemy Bet likes to create some sort of chase theme to move along its nine-level trail and this one would be the filthy rich escaping the paparazzi through London’s Chelsea District. This is the setting for a traditional Vegas-style slots game with your familiar fruits and bars and sevens spinning on the reels.

The bonus feature in Paid in Chelsea comes along the nine-level trail which is completed by numbers falling out of the reels during basic play. At Level 4 a bonus spin is triggered and if you make your way all the way through the levels you are escorted into the Chelsea high life where your mission is to race around a game board collecting prize money while the paparazzi snap at your heels as they snap their photos.

Back in normal play three Jackpot icons will break the progressive jackpot that takes a few coins from every player in Pocket Fruity casino playing Paid in Chelsea. Totes amazeballs all!