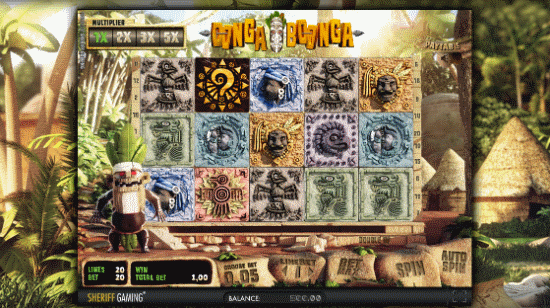 Sheriff Gaming turns on the Wayback Machine and lands in caveman times for its mobile slots game Oonga Boonga. With its 3D graphics and big multipliers this game could have you saying, “Oonga Boonga” as if you had just discovered fire.

This is a five-reel game with 20 paylines to play. Betting can begin at 0.01 coins. There is no progressive jackpot but the multipliers can make the in-game awards almost as Oonga Boonga.

These prehistoric peoples have evolved past their cave dwelling days and constructed a village of tidy thatched huts in the jungle where your games will take place. They still have their elaborate stone carvings of animals, nature and the spirit world. There is an energized tribal leader on hand to play host and he is certainly as happy as you whenever a winning combination is made. He emits a steady stream of Aboriginal sounds but “Oonga Boonga” is not one of them. The fearless leader can also multitask – while cheerleading for you your play he can also take time out to try out his blow darts on jungle birds. Apparently these villagers know the meaning of money because it showers down the screen on big wins.

The playing card has yet to evolve so all the minor icons are stone carvings. You may never memorize them but the Spirit Bird is the highest paying of the seven intricately drawn symbols. Five of them on a payline return 400X your stake. Combinations pay from left to right and all wins on payable lines are added to your bank.

The main feature of Oonga Boonga is one that even advanced societies can endorse. After each winning combination the icons involved disintegrate in a puff of smoke and new symbols appear in their place. As this happens a multiplier moves to 2X. If the new batch of symbols produce a win the process continues and the multiplier moves to 3X and finally up to 5X if your winning streak continues. Only when you fail to make a winning combination does the multiplier return to 1X.

A stylized Question Mark is the Oonga Boonga Wild and it appears only on Reels 2, 3 and 4. The Question Mark assumes the form of any other symbol when it appears, save for the Gold Mask that is the Scatter. When three or more hit the reels the scene shifts into a boulder-strewn cave for 10 free drops, as spins were called in Sheriff Gaming’s prehistoric times. The multipliers now hopscotch all the way up to 15X and you can anticipate wins in the tens of thousands of coins here. More spins can come during bonus play.

The Tribal Leader is also willing to sit down and toss a coin to give you a chance to Double Up your most recent winnings. For a group still struggling with the concept of rocks and sparks and fire they are pretty sophisticated with their money in Oonga Boonga.