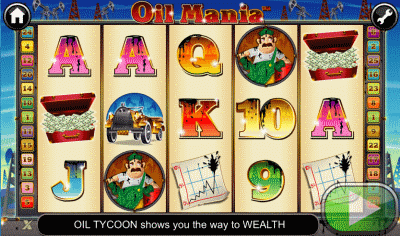 Welcome to where the real money is – although you would not know it given the slot world’s obsession with gold. Oil is just not sexy enough for most software developers to build a slots game around. NextGen Gaming takes on the challenge of making black gold exciting with Oil Mania.

This is a five-reel game with payouts on 25 win lines. There is no progressive jackpot to prospect for and not many free spins to drill for, just a single bonus game to stake your fortune on. You can start playing Oil Mania with 0.01 coins. Autoplay can make the drilling go faster.

Oil Mania is set in an oddly striped drilling field with derricks pumping in the background. The choice of symbols, however, does little to get the pulse racing in any hunt for the prized fossil fuel. You get a stock chart of oil company performances and a chest of cash along with a vintage roadster and a car mechanic who is the highest paying symbol in the game. The minor playing card symbol are caked in oil splatters as if they just got caught in a gusher.

If the icons in Oil Mania do not get you excited at the prospect of striking it rich perhaps the game play will do it. Well, you are going to dig a lot of dry holes on that score as well.

The signature feature is the Upwild Bonus that is triggered by the jaunty Oil Tycoon when he lands anywhere on Reels 2, 3 and 4. The bonus is three free games. On the first spin the Gusher is Wild on the bottom position. Before the second free spin the Gusher grow to include the second row as Wild and finally before the last free spin the Gusher reaches its top height and the entire reel is Wild. The feature can be re-triggered when just one Oil Tycoon shows up and opens another well. Before all is said and done you could be free spinning with six positions Wild.

But that is it for the big doings in the oil field in Oil Mania. It could have worse. It might have been about motorists queueing up at the petrol station.