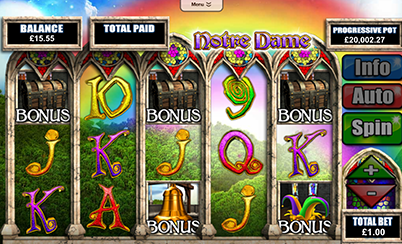 For those worried this might be some sort of religious-themed slot it is not. For those architecture fans hoping this would be a colour tour of the great cathedrals of Europe it is not. Notre Dame is actually more of a jester and a princess kind of game from Mazooma Interactive.

Notre Dame is a five-reel mobile slots game that juggles up wins along 20 pay lines. You can start the wagering for just 0.01 coins and enough levels of play to support as many as 10.00 coins per spin. There is also an Auto Spin option to help you entertain even quicker. There is a linked jackpot to chase among all Notre Dame players. Only the highest line win is paid on each line. All vlail line wins on the screen are added together and paid.

This is a royal court themed mobile slot about a jester who seems a bit of a hunchback. Regardless he seems like a fun and welcoming sort. Most of the symbols are the minor playing cards – six of them. The few that are not can deliver the goods on the money end.

The Old Coin is the Wild and it will substitute for every symbol except the Wilds that are played by the Treasure Chest, Golden Bell and Jester’s Hat. There are no multipliers applied when the Wilds stand in to make a winning combination. On its own the Old Coin will return 200X for three in a row left to right and 2000X for four and a whopping 20,000 for five across a payline. The Jester pays out a maximum of 3,000X and the Princess wakes up and awards 2,000X for a bet.
Reels 2, 3 and 4 are the only place to find the Jester’s Hat which is the Scatter. It will take at least three of the Jester’s Hats to make the Jester’s Hat Bonus happen. Choose from the triggering Jester Hats to reveal up to 20 Free Spins. Pick again to reveal a bonus multiplier up to 7X to apply to all wins in the bonus. No further free spins or bonus plays can be triggered by the Jester Hat during bonus play. You never turned around to the frowns on the jugglers and the clowns.