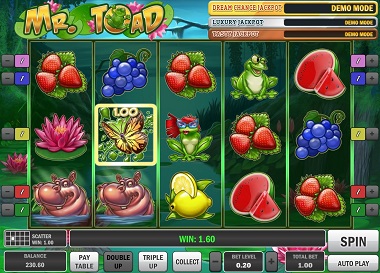 So, Mr. Toad, is there a Mrs. Toad? That is just one of the questions Play,n Go seeks to answer in its cartoon mobile sots game Mr. Toad that keeps things light and breezy as players chase three tempting jackpots.

Mr. Toad is a five-reel mobile slots game with just 5 pay lines to keep track of. You can start the music playing for just 0.05 coins but you will need to wager at least 0.10 coins to be eligible for a progressive jackpot. There are three of them at play in this sylvan wonderland. There is also an Auto Play option and a Bet Max option. Mr. Toad pays on combinations running left to right an right to left.

This is a make-believe world of love and danger and jackpots. First of all, forget all the things you know about toads like the fact that they are brown and not green and that they live on land and not in the water. If you want to go all taxonomical toads and frogs are pretty much the same amphibian so when this knot of toads acts just like frogs, just go with it. And yes the stomach anatomy of a hippopotamus is not constructed for carnivory so when it stalks the toads for a meal just roll with that, too. After all those grapes, lemons, watermelon and nicely turned out strawberries are not on the toad’s menu either. As for the sounds that the amphibians are making, well, you can always mute the game.

This is a tame little forest drama so nothing is wild and all symbols are what they say they are. Apparently Mr. Toad and Mrs. Toady are still a happy couple because they will form a winning combination either on their own or when appearing with each other.

The Pink Lily Pad is the trigger for the Bonus Game in Mr. Toad. Three will start th egame but if can uncover four or five the subsequent prizes will be higher. The leaves of the jungle part to reveal a lily pad with the lovely Mrs. Toad sitting demurely on the opposite side of the water spewing hearts about her. Mr. Toad gallantly makes his way across the lily pads uncovering bonus money for your bank with each bound. If he makes it all the way to his true amphibian love you are the winner as well in coins. If the hungry Hippo devours him the game will end. At least you have the consolation that Hippo is in for one gnarly stomach ache later in the evening.

The Butterfly Bonus takes place in the course of regular play. Anytime a butterfly lands to the left of Mrs. Toad or the right of Mr. Toad a sticky tongue will snap out and splatter the insect and reveal a multiplier of your stake.

After any win you will get a chance to exercise the Gamble Feature. You can Double Up or Triple Up your bounty by picking symbols. You can test your luck up to ten times in a row or if you actually beat those odds, up to £50,000.00. Ribbit.