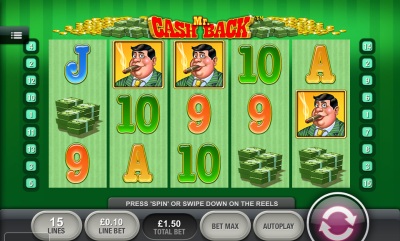 Mr Cashback is a little trip back to the old school with this slot from PlayTech. Its mobile version is actually almost identical to that of their online offerings, but this simple, no nonsense slot will provide a reasonably good amount of playing time. The game is a bit of a cliché in all honesty, a fat man smoking a big cigar with a handful of cash. But, this almost retro feeling slot does provide that usual PlayTech gameplay from its low volatile outfit.

Mr Cashback will target players looking for multiple pay-outs and games that are cheap and will offer them a fair deal of playing time. It’s a 5 reel, 15 payline slot with minimum bets starting from just 0.15 coins. Features include a number of wild cards, free spins, scatters and also your money back on lines that haven’t won for 50 consecutive spins.

The app looks reasonable at best. In terms of design it’s definitely lagging when you compare it to other PlayTech titles such as Iron Man 2 or The Incredible Hulk. There have also been reports of the app failing to load on Android devices, so bear this in mind before starting out on the real money games.

Probably the most interesting aspect to the game, and something which we don’t see very often, is that Mr Cashback offers you the chance to win 50x your 1 line bet amount on a payline that hasn’t paid out for 50 spins. It’s definitely an interesting concept but it’s one that we found really added to the game and constantly found ourselves searching for paylines that could drop as the unsuccessful spins racked up. With some spins, it actually worked out financially beneficial for the payline to not win and payout the 50x payline bet than it would if it paid out for matching any of the symbols.

The feature round is made of getting 3 or more scatter symbols to be taken to the Mr Cashback free spins section. Here you will get 12 free spins, but you will also get multipliers on top of that ranging from 2x to 5x. As we mentioned earlier, this slot is very much targeted towards players who are looking for a low volatile game and the pay-outs aren’t always that great. Don’t get us wrong, there is still some very decent money to be won on Mr Cashback, but it’s more likely to be little and often than a massive payday.