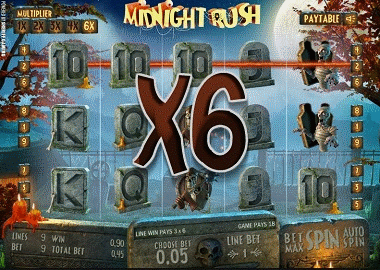 There are a lot of things the Midnight Rush mobile slots game from Sheriff Gaming could have been about. A frantic run for food in the middle of an all-night study session. Or the charge towards the bar before closing hour. Or even a dash to the loo after a plate of bad clams. But instead Sheriff Gaming has provided a tale of ghouls.

Midnight Rush is a five-reel game with nine paylines. There is no progressive jackpot to scare up and no free games to chase after. But these ghouls have to power to multiply wins which will rivet your attention. You can sneak into the game with just 0.02 coins and bet up to six coins per line for a maximum stake of 54 coins on each spin. The Bet Max button makes it easy to bet big and and Auto Spin frees you up to keep your eyes alert for danger.

The setting for this horror show is a Gothic-tinged burial ground that is peopled by your typical cast of undead – vampires, mummies, werewolves and zombies. The minor playing card symbols are etched on tombstones and come with bones and skulls attached. The moon is obscured and what little light there is comes from blood-red melting candles. The music is appropriately sinister and not even game wins intrude on the eerie soundtrack with anything resembling happy celebrations. Instead the winning line burns across the reels and a cloud of bats greet a big score.

The Wild is the word itself spelled out in bones and candles but it is malleable enough to expand anywhere from one to three full symbols on a reel. The Wild is haunting only Reels 1, 2 and 3 and replaces every symbol save for the Full Moon.

That Full Moon triggers all sorts of weirdness when three or more illuminate the reels in any position. You can then start in on a Click Me Bonus that pays until you finally tap the Collect symbol.

Midnight rush offers no Scatter for free games and its biggest potential bonus comes from the basic play. A five-position multiplier in the northwest corner ignites before each spin to as much as 6X your stake which means that The Vampire can pay as much as 4800X your wager if he were to skulk across all five reels. Now that would be something to scream about.