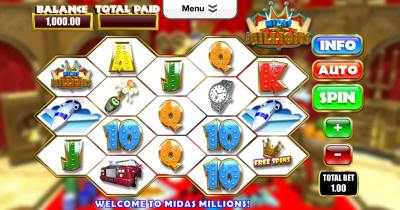 Midas Millions by Ash Gaming cashes in on the figure from Greek mythology most associated with great riches – King Midas. The developers have put a lot of thought into this mobile slots game and you will have to pay attention playing as well.

This is a five-reel game but there are no paylines like those on traditional slots. Instead the vertical rows are laid out in a honeycomb pattern where each cells touches at least three others. And the reels don’t spin. Instead the cells just flip in place until the play ends. The payouts are determined by symbols huddling into groups. The manufacturers tell us that this provides 118,700 different ways to win. Which sounds great until you realize if you can’t win at least one way when there are 118,700 chances you are, well, let’s just say, not lucky.

Legend has it that King Midas was endowed with the power to turn anything he touched into gold. He is said to have become so consumed with greed from his power that he turned everything into gold and died of starvation because he couldn’t eat anything. In Midas Millions this is not your grandfather’s King Midas. For one thing he looks like the Burger King’s freakier brother sporting blue jeans and a Las Vegas tee shirt. Scattered around his baronial throne room are such symbols of unfettered wealth as a box of half-eaten pizza and headphones that look like they belong to a Walkman. The symbols of luxury on the reels in Midas Millions – Rolex watches, popping champagne bottles, jets, and fancy cars are more traditional.

The Midas Million logo is the Wild symbol and it only needs to substitute for one other symbol to forge a winning combo. You can have more than one winning symbol mash-up per spin.

The bearded Midas is lurking behind the semi-transparent honeycomb to reach out from his thrown and literally turn symbols to gold. He does this to link Wild symbols on the same diagonal row to form combos paying double. On a Super Wild – available only in the middle reel – the King changes up to six symbols into wilds on the board.

Three free spin scatters – you’ll recognize them quickly because they say “free spin” – will deliver ten spins gratis. You only get ten. There is no re-triggering but the King will randomly change zero, one or two symbols into Locked Wilds which remain in place for the rest of your spins.

At the end of your free spins session with Midas Millions all your winnings will be totaled and if they are less than 10X your stake the King will throw in a Mystery Bonus. Now that’s a nice touch.