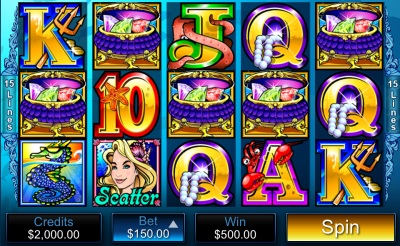 Mermaids Millions is one of the most colourful underwater mobile slots we have come across. Whilst the theme itself isn’t particularly innovating, we were delighted to see that this once popular online slot has made a pretty seamless transition to mobile gaming.

What’s so good about Mermaid Millions is the fact that it has pretty much everything you could need from a mobile slot of this type. Firs up you get your 5 reel, 15 payline layout and whilst some would argue that the better games come at 20 paylines and above, we think it works just fine for this game. Probably the most interesting thing going for Mermaid Millions is the number of people it will attract with its minimum bet of just 0.30 coins up to its maximum of 150 coins.

We would suggest that this theme is based more around underwater life than just mermaids, which actually turns out to be a pretty big positive in our opinion as there’s only so far you go with our legless friends. That being said, the graphics suit the mobile screens and as we have mentioned, has made a good transition into the mobile industry.

The scatters re where you are going to be looking to get a hold of the 7,500 coin jackpot. To get into this section you must get three of the laughing mermaids and then you’ll receive a 5 x multiplier over your 10 free spins. This number admittedly is on the low side, but you can retrigger them as you go which doesn’t seem so bad, although we haven’t actually managed to do so.

The final feature of the game comes within a pretty simple pick and play game of which you need to collect three or more treasure chests whilst in regular play. The amount of treasure chest you receive will result in the amount of options you get to pick from. The prizes will range between cash prizes and then multipliers but in all honesty, this isn’t the most lucrative part of the game when compared with the free spins.