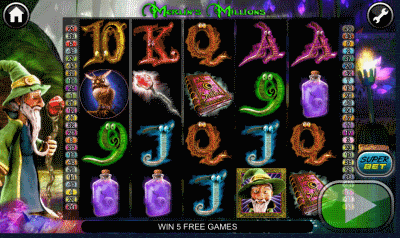 When Merlin was hanging around King Arthur back in the 6th century the wizard was known for his power to dispense sage advice. These days apparently Merlin’s powers are put to use creating riches and he’s doing it again in Merlin’s Millions from NextGen Gaming.

This is a five-reel slots game with 50 paylines. There is no progressive jackpot but Merlin works his magic to create bonus games and free spins.

Even though he is an all-powerful wizard Merlin takes his job of creating millions of dollars in his dark fantasy forest seriously. He has brought all the tools at his disposal – glowing red wand, spell book and potion bottle. His pet owl Archimedes is never far from view and a blue orb to let you know a spiritual guide is present is also at hand. Even the minor card symbols are outfitted with pairs of watchful eyes. Merlin himself is especially on top of his game here, casting spells on the reels on each spin, casually tossing out gold coins when deserved and celebrating with unabashed joy on big wins.

Let’s start with a clever little thing Merlin has worked up for treasure seekers called SuperBet, but it is only for the biggest game hunters who are playing all 50 paylines. For these players Merlin has installed a slider in the far lower right corner that increases your stake by a Wild Multiplier up to 10X. It costs more so you decide to bet a little extra, bet a lot extra or none at all.

Merlin is the Wild symbol and he replaces all other symbols except Archimedes or the Orb, each a Scatter. There are times the old wizard cannot contain his enthusiasm for the game and he Stacks up to conjure even bigger wins. This occurs on the three middle reels only.

When three or more Orbs penetrate the fantasy forest anywhere on the reels they trigger a five-spin bonus. Merlin cannot abide standing by idly so he will jump into the Free Spins Bonus at random to turn certain symbols into Wilds. He may even cast his spell over an entire reel.

Archimedes delivers the Owl Bonus when three of his likenesses scatter across Reels 1, 3 and 5. Sleeping owls perched in the night-time now fill all 20 spaces on the grid and Merlin awakens the ones you select to fly off and leave prizes behind. The round ends when an owl commands you to end the disturbance and collect.

As long as the magic is flowing you can risk every win with the Gamble feature on a turn of a card. Guess correctly on the colour and double your winnings or the suit and quadruple your haul from the forest. A wrong guess loses all and sends you back into the forest to look for more of Merlin’s Millions. But don’t blame any bad luck on the wizard – he is working hard here.