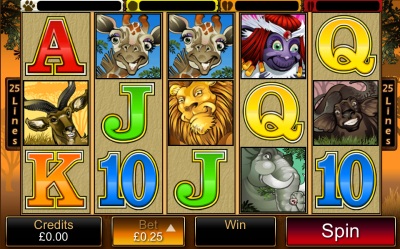 For those of you unfamiliar with online slots, then you will likely have never heard of Mega Moolah, but it’s been one of the most successful of its type for a number of years now. The games title is a little informative regarding what the game looks like, but we will explain more about the title later in the article.

On offer is one of the best 5 reel, 25 payline games in the industry, which is as standard as mobile slots come. In all honesty, features aren’t a massive part of the game but there is an inclusion of wild symbols, free spins and a lucrative in house jackpot.

The slot is based around a Safari theme, which actually has nothing at all to do with the title. But it looks great in all honesty, if a little random, and the inclusion of goofy looking safari animals such as giraffes, antelope, lions, monkeys and elephants actually make the game a great deal of fun.

So what is the title all about then, I hear you cry? Well, the Mega Moolah slot actually includes 4 progressive jackpots which is about as many as you’re ever going to get on a mobile slot. Each jackpot ranges between 10 coins and 1 million coins, which makes it worth winning, to say the least!

The downside to it all is that the jackpots work on a completely random scale, which means we can’t even tell you what to look out for.  We have heard that the higher you bet, the more chance you have of hitting the bigger jackpots, which would then equate to each player being put within one of the jackpots play brackets depending on bet sizes. This would likely make sense and is in line with the majority of these promotions. The categories are split up into 10, 100, 10000 and a massive 1000000. Don’t forget that the in game jackpot, which runs adjacent to the progressive jackpots totals a very cool 225,000 coins!

Away from the jackpots you will also be able to access the free spins game which requires you to get 3 or more of the monkeys. Once into the game you will receive a multiplier of 3 times your winnings throughout your spins.

Another point worth noting is that whilst all these jackpots and free spins games are on offer, you don’t need to break the bank to play away. Spins start at just 0.10 coins and range up 6.25, so bear that in mind when making your decision on whether to play one of the potentially highest paying mobile slots in the Microgaming back-catalogue.