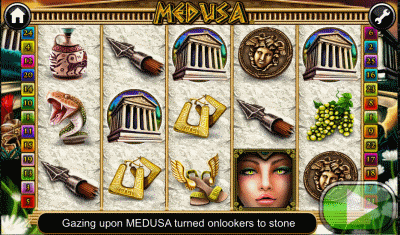 Most of the time the many gods from Greek mythology tend to run together and their powers get muddied in the modern imagination. One who manages to avoid that fate is Medusa. She is the monster so hideous her hair was actually writhing venomous snakes and looking at her directly would turn you to stone. That Medusa. The one with hatred for all mortal men and the one Sigmund Freud used in psychoanalysis as the supreme image of castration. Now that we have all those good thoughts in mind let’s play slots with NextGen Gaming’s version of hat joviality.

Medusa is a five-reel mobile slots game with 25 paylines. There is no progressive bonus but there are three bonus rounds to be pursued. You can match wits with Medusa for just 0.01 coins up to a maximum of 5.00 coins per payline. There is an Autoplay feature to help keep you from staring too long.

Medusa is the ultimate dance of seduction and risk. Only those slots players stout of heart would venture into Medusa’s lair to seek treasures. And once the bold do so they must be careful not to fall under the monster’s spell for once she was the most ravishing beauty in all the land. And she is trying hard. The setting is deep in Medusa’s lair and the graphically-impressive game opens with cracks of lightning above Greek temples. A pastiche of ancient Greek life is on display with bunches of grapes, amphoras of wine, snarling asps and bronze coins all making appearances and Medusa’s children, Pegasus the winged horse and Chrysaor, both playing prominent roles.

The most elaborate of Medusa’s games is the Turn To Stone Bonus which she triggers herself as the Wild. When her face appears three times she turns Reels 2, 3 and 4 to stone. On one of the reels the stone will crack and a full vision of Medusa will be revealed. She has not bothered to wear a lot of clothing for this appearance but since you will be turning to stone if you look too long it does not much matter. Meanwhile you get three Free Spins with the Expanded Wilds and your wins are tripled as well. That was worth looking into.

Potentially even more profitable is the Once Bitten Bonus, triggered by three Medusa Logos anywhere on the reels. You are now awarded ten free spins where all awards are doubled. Chrysaor makes his entrance into this round in the guise of a soldier and if he settles on Reel 3 a Super Spin is initiated after the bonus when awards jump to 5X your stake.

The other Medusa sibling, Pegasus, has his own bonus game, It is a quick Pick Me feature when he lands three times on the reels. Choose one of the winged steeds and collect instant prizes and maybe an additional pick or, if Medusa is feeling really charitable, all the Pick Me prizes.

You took a chance even coming into the monster’s lair so a Gamble feature for your recent wins is a natural. What’s the worst that could happen? You turn to stone or something.