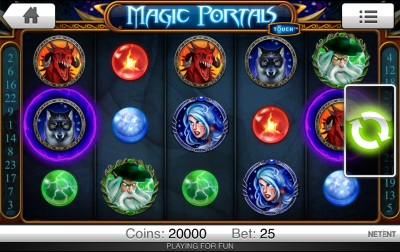 Magic Portals is a mystical adventure designed by the gurus from NetEnt. They seem to know no boundaries when it comes to mobile slots, and the design and features on this game are no different. It’s based very much in the fantasy land, which weirdly can’t seem to really decide if it’s in the future or the past. Although, that’s by the by really!

The game is a pretty simply 5 reel 25 payline slot but includes some nifty features such as magic portals, transforming wilds and a host of free spins as well.

The game has been a long-time favourite on the desktop version of NetEnt’s products, but Magic Portals seems to have made a seamless transition to the mobile platform. It’s based around that sort of mysterious creature theme, which include the likes of wolfs, fantasy figures and colourful portals. The graphics and sounds have clearly been an area in which NetEnt have worked hard on for this game due to it looking and sounding so dam good!

The centre of reels 1 and 5 will become very important in this slot. They are essentially transformation portals which will swap any matching symbols to those in the portal and turn them into wild card symbols. The returns for this are often some of the more lucrative on the game but they do limit the way in which bet lines function, essentially taking away two possible sections of the game. We would have to play on Magic Portals a lot longer and fire up some serious maths to work out if this is beneficial for the punter or not.

The second feature is the free spins section, which is pretty basic. You need to match them up on reel one and reel two to get 10 free spins. But those magic portals also come into play once again within the free spins and if you manage to match two symbols in each, an additional two portals will open up, essentially working as a type of multiplier.

It’s the sounds and graphics that really make this mobile slot a winner for us. In fact, we think this aspect is pretty perfect in all honesty. The number of features is an issue but what’s there actually functions really well. What this slot isn’t going to be is your volatile, high drama, big pay day slot. It doesn’t even include a maximum jackpot amount. But, Magic Portals will provide a game where you definitely get a lot of play for you money. Stakes can range between 25p and £200 a spin, which should cater for pretty much all bankrolls.