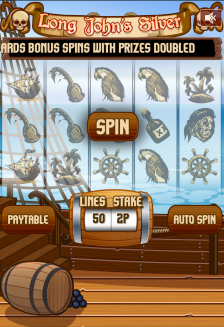 Long John’s Silver is a five-reel slots game that offers 50 paylines to play. Wagering can begin with as little as 0.01 units with a maximum of 1.00 unit staked per line. There is no progressive jackpot to plunder with this crew.

The slots action plays out aboard an old time sailing ship. Enhancing the theme are jugs of rum, ship wheels, cannons, cutlasses and, of course, Long John Silver’s parrot. There is a tropical island hideout and enough skulls to justify the haunting soundtrack.

The Pirate brings the basic game’s biggest prize – 3000X your stake for five across a payline. The Skull and Crossbones is the Wild and it substitutes for all the other symbols to create winning combinations. Every win on an activate payline causes the pieces of eight to dance on deck.

The Treasure Chest is the Scatter and it activates a round of Free Spins, either six, eight or ten depending on whether three, four or five Scatters appeared. All prizes double during bonus play – that Pirate jackpot now brings back 6000X your stake – and the frees spins can be re-triggered. Stand by to go about!