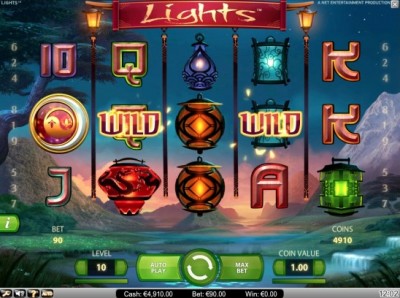 The lights in question in this mobile slots game from Net Entertainment are the ephemeral illumination provided by the traditional Chinese sky lanterns – launched for centuries at important festivals. Keep your wits about you during play and you will feel like sending your own celebratory fire balloons into the sky as your bank lights up. Lights is a five-reel mobile slots game with wins waiting along 9 paylines. Only 0.01 coins will start the delicate paper lanterns airborne and you can bet as much as a hefty 10.00 pounds per payline to put 90 pounds into play on every spin. There is no progressive jackpot to chase but the skies are filled with wilds and free games. An Auto Play option and Maximum Bet button allow nothing to interfere with the tranquillity of the Chinese night.

The ornate lights are magically suspended on a translucent screen floating above a mountain valley with stepped waterfalls tumbling into a turquoise lake as the sun sets brilliantly behind a cloud-dappled night sky. The minor playing card symbols are afforded a light-infused aura. As you are lulled into a dreamlike state by the hypnotic spinning of the light-crusted reels a mellow soundtrack completes the relaxing mood of this atmospheric mobile slot.

But it is not the Chinese lanterns that are the true stars of Lights. Instead the serenity is dissolved by flitting golden fireflies that appear before every spin and transform mundane everyday symbols into powerful Floating Wilds. Every time the reels lurch into motion at least two, and maybe as many as four, symbols have become Wild to help make winning combinations. The Floating Wilds are the only extra scoring feature of Lights; the other feature coming out of basic play is the free games where the fireflies are even more persistent. The jewel-like Yin Yang plays the role of Scatter and the good vibes begin when at least three populate the reels to bring 10 free spins. Four Scatters will award 20 spins and five bring 30 straight free plays. The Wilds bulk up during bonus play with each spin beginning with between three and six Wilds. This feature can be re-triggered which will really light up the screen with Big Wins and Mega Wins as coins and emeralds spout out of the lake. The top in-game prize is 1000X which can be as high as 90,000 coins. Release the sky lanterns!