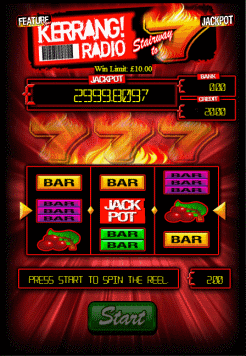 Players of the electric guitar know that when you distort your instrument at just the right frequency when playing a power chord you achieve a sound that can best be described as “kerrang.” And so was born the the UK-based magazine devoted to all things heavy metal in 1981. When the publication branched out to radio it dished out mainstream adult rock which has now been translated to Kerrang Radio. Alchemy Bet has teamed with Kerrang to produce an homage to rock music in mobile slots form, riffing of course off Led Zeppelin’s Stairway to Heaven, a song that even though never released in the States as a single was nonetheless the most requested song on FM radio stations for decades.

Kerrang Radio Stairway To 7 is a three-reel, five-payline game. There is a progressive jackpot and the burning hot, rock-infused sevens can pay out large as well.

As expected Kerrang Radio Stairway To 7 plays to the pulsating beat of hard rock. It is a Vegas-style slots game with bars and cherries and sevens. Some of the traditional symbols have been replaced by electric guitars and Kerrang Radio personalities.

There are actually a whole lot of Sevens roiling around on the reels, white Sevens and red Sevens and Blue Sevens. But the hottest on are the Sevens that have been set afire. The Flaming Sevens will trigger the feature round. I’m sorry, this a DJ-themed game – the Special Super Feature round. This involves a new board with five winlines, more Kerrang disk jockeys and piles of coins that could make a rock star take notice.

The biggest draw here is the progressive jackpot that keeps on rocking with every player across the Pocket Fruity casino that is tapped in to Kerrang Radio Stairway To 7. These jackpots can squirm their way into the thousands before they are hit. It is a wild and crazy rock ‘n roll slot.