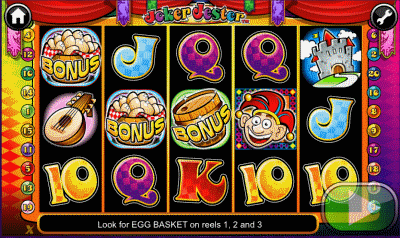 The carnival may not be the first place you think of when you are on the hunt for riches but Joker Jester by NextGen Gaming could have you changing your mind. There is plenty going on under this Big Top so you will have to keep your wits about you to win the big prizes.

This is a five-reel slot with payouts on 20 lines. There is no progressive jackpot and no free spins. So where’s the fun? it is in the bonus games orchestrated by the Joker Jester. Admission to the show can be as little as 0.01 coins or you can grab a front row seat for 2.00 coins.

Joker Jester takes the circus theme and gets rids of any edge-of-your-seat high wire acts and wild animal shows. It is all about that funster, that trickster – the Joker Jester. NextGen has cranked up the intensity on the bright colours and turned the minor playing card symbols into jaunty, carefree souls dancing about the reels. If you are not having fun in this carnival tent it is on you and not the maestro of entertainment up on stage, the Jester. So strap on your Lute and get ready to enter this Fun House.

The Jester is Wild and he substitutes for all the other symbols save for the Juggling Balls, Basket and Barrel, all of which he will be using during the show. If he fills out a payline with five laughing icons he will return 500 coins.

But the Jester is busy. When he isn’t juggling coins to toss your way he may decide to hop across the reels after any spin and randomly just turn symbols wild. Not only does this outbreak of joviality turn lifeless reels into possible new winning combinations but it can trigger two more bonus games from the Jester Joker.

The first is the Barrel Bonus that is activated when the Barrel appears on Reels 3, 4 and 5. When this happens you are transported to a field behind the carnival tent big enough to hold ten barrels. At your direction barnyard animals are hurled at the barrel of your choice, blasting the staves apart and revealing a monetary prize. You keep on accumulating riches until you strike the barrel containing the Jester.

The Juggle Bonus takes place when the Basket of Eggs lands on Reels 1, 2 and 3. Again you are taken off to a sideshow with the Jester joker deftly juggling three eggs from the basket. Eggs are added one at a time, increasing the difficulty of the juggle and correspondingly raising the bonus pot that can go as high as 500X your stake if the Jester can improbably juggle all the eggs from the basket without breaking any.

The Scatter is the Juggling Balls icon but it will return only coins, not free games. But you may be played out by now anyway. Thanks to the Joker Jester, he’s so much fun he needs his job stated two ways.