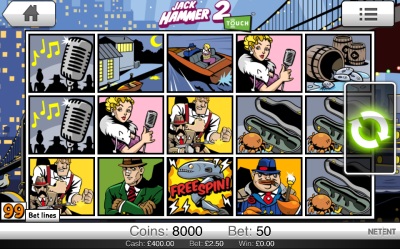 Jack Hammer 2: Fishy Business see’s the sequel in one of NetEnt’s most popular games, Jack Hammer. The game, whilst very different, still includes that old school cartoon-like design with the inclusion of some of the games older characters, along with the introduction of new ones. The private investigator theme continues, with the story revolving very much around Jack Hammer and his quest to serve and protect.

The games most notable upgrade from the original has seen a massive increase to 99 paylines from that of just 25 from the original. The 5 reels have continued and also the inclusion of sticky bonuses which were so popular in the first one.

The design is very much in that original, old-school comic book form, which, as we mentioned in our original Jack Hammer review, feels very much like the original Batman comics. This however features a private eye trying to save a series of damsels in distress from that of folk whom shouldn’t be sniffing about.

Whilst the game hasn’t changed massive in principal, the design still looks superb and the colours of the comic filled mobile slot really do look fantastic with nothing being lost on the mobile device.

The sticky wins have remained on the slot, which is a massive triumph to the popularity of this feature. They were something that we hadn’t seen work with such good effect before and Jack Hammer 2 has definitely continued that success even more with the sticky becoming an integral part in making a good chunk of money. You will also see these within the free spins bonus game, again adding to depth of this mobile slot.

The free spins symbols are essentially what get you into the bonus section and to do this you will need to pull up five or more to gain access. Now this seems like a massive amount for a 5 reel slot, but the inclusion of the sticky boxes means that it’s much more attainable than you might think. Depending on how many free spin symbols you earn will result in the amount of free spins on offer. So starting at 5 symbols you will get 10 free spins. This works its way up to 8 symbols offering you a maximum of 20 free spins. A set 2x multiplier is on offer within the game, which is a solid number but the lack of being able to increase this amount whilst in the game, probably lets this mobile slot down just a little.

The only downside that we can see is the jackpot amount of 5,000 coins. But on the flip side of that, whilst the jackpot has been reduced from the first one, the paylines have massive increased almost 4-fold, which means that you should be winning more often, especially with an average pay-out of 97% on offer. Overall a fantastic mobile slot!