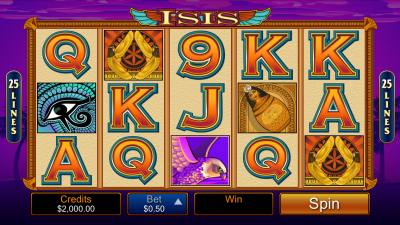 Time and again game developers return to the themes of Ancient Egypt, perhaps hoping to transfer the mysticism of the Old Kingdom to today’s mobile slots players. Here Microgaming has wrapped its slots action around the goddess isis who was known to respond to the prayers of the wealthy and the downtrodden and even the occasional gambler.

Isis is a five-reel game with 25 paylines. There is no progressive jackpot but the abundance of free spins tied to generous multipliers makes this an attractive game for big-time players.

Isis was the Egyptian goddess of fertility, an apt representative for the culture in a game where your money can grow rapidly. The developers have not selected their imagery haphazardly. You do not need to know that a hawk was considered a royal bird and a symbol of the soul in Egypt and thus given prominence in the game to enjoy play. And the money spends the same whether or not you can identify the Eye of Horus who shows up because it was an ancient Egyptian symbol of protection, royal power and good health. The rich, hand-painted symbols in Isis transport you right in to the heart of the Nile valley.

Isis the wild symbol and if she plays a part in any payline coins will be doubled. It’s always good to see the magical goddess. If you see her three, four or even five times on the same spin you cash even more coins – up to a maximum jackpot of 100,000.

But the appearance of the sharp-eyed Hawk, playing the purple-tinged scatter symbol, is even more welcome. If just three Hawks show up it is worth 20 free spins. Four ups the reward to 25 free spins and if an entire kettle of five Hawks arrive there are 30 free spins. And the Hawks can re-trigger more free spins as you go, each carrying a plump 6X multiplier. So if those five Isis symbols happen to congregate on the same payline during a free spin that amounts to 600,000 coins. That is one powerful goddess.

Isis also comes with a gamble feature that allows you to risk your most recent winnings on the turn of a card. You can double and quadruple your bank by calling the color or suit correctly. Or lose it all. Isis is clearly a stop high rollers will want to visit but beginners need not stay away. The pyramid-sized multipliers and free spins can be won with just a single payline.