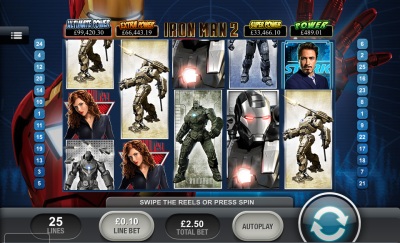 The Iron Man franchise has quickly become one of Marvels biggest movies and it has been this success that has brought about their latest release in the Iron Man 2 mobile slot. Obviously, the slot of based on the second Iron Man movie, although in reality, the game could be based around any one of the trilogy.

For those of you unfamiliar with the Iron Man trilogy, this slot follows the adventures of Tony Stark (Robert Downey Jr.) as he creates a bionic suit to help fight against all that is bad in the world. For those of you familiar with the second Iron Man film, then fear not, as this slot is a great addition to the Marvel Corporation, unlike the film!

The graphics and sounds are of a really good standard, as is often the case with these franchised slots. What’s interesting is the inclusion of a kind of commentary as you play to signify when you get something that’s really good in the slot, like free spins or 5 of a kind.

What we really like about slots that have been developed from Marvel themes is their integration with a really healthy progressive jackpot. The Iron Man 2 mobile slot includes a series of progressive features that have some relation to the word ‘Power’ with the greater adjectives resulting in a more lucrative game. Even though we are yet to sample the delights of the progressive game, we are informed that you will have a chance to take one of four bonuses of which will have a ranging payout of jackpots.

Upon getting three of the Iron Man symbols will allow you to enter the free spins section. Unfortunately, this is limited to just 10 and it won’t matter if you get any more than three symbols in real time. Once in, the multiplier will increase for each two sets of spins. Starting at 1x, it will increase to 6x for the last two spins. It’s also worth noting that you will get to keep the wild symbol for each spin making the opportunity of combinations massively increased. In hindsight, this probably makes up for the lack of free spins within this bonus round.

Finally, as with all Marvel mobile slots, the Iron Man 2 slot entertains the inclusion of a stacked symbol. This works as more of a strip that includes symbols, increasing the opportunity you have in matching multiple symbols. These range between different characters in the game, each of which having different financial benefits that can be found in-game.

All in all, another cracking mobile slot from the guys at Playtech and Marvel. Graphically it’s excellent and the inclusion of a decent amount of bonus games makes for an enjoyable playing experience. The only downside, for some, might come in the form that the minimum bet stars at 25 coins and goes all the way up to 250 coins per spin which will discourage a fairly large proportion of the industry.