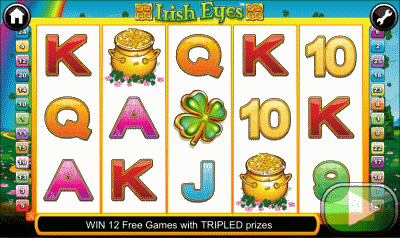 Irish Eyes from NextGen Gaming is another of the Irish luck, rainbow and pots of gold mobile slots games. Like so many of the tropes that romanticise Ireland Irish Eyes did not start smiling in the Emerald Isle but tin he United States. “When Irish Eyes Are Smiling” was a show tune written in 1912. The song has been recorded over 200 times and now it has found its way to the gaming world.

This is a five-reel game that pay along 25 paylines. There is an ample wagering range from 0.25 coins to 100 coins to eye the big bettors. There is no progressive jackpots at play but there are bonus games and free spins. Autoplay and Max Bet are available.

Draw up your requirements for a Celtic-themed slot. Leprechaun. Check. Pot of Gold. Check. Shamrock. Check. Red-haired girl. Check. Yellow Brick Road? Not sure what that has to do with Ireland but throw it in anyway. We are running out of Irish icons. Toss in a lilting Irish soundtrack and come up with a title that has the slightest Irish connotation and you have done the absolute minimum required to launch Irish Eyes.

The icons with the eyes are the stars here. The Lady is the Scatter and she begins paying when she shows up twice, up to a 100 coin return for five. If she appears three or more times left to right anywhere the Lady triggers a bonus of 12 Free Games. Awards are muscled up by a factor of three during the unpaid spins and the bonus can be re-triggered.

The Leprechaun’s eyes are not nearly so prominent as the Lady’s but his are smiling all the while. First, five Leprechauns return the fattest jackpot in the game – 10,000 coins added to your bank. He is otherwise engaged substituting for all the other symbols save for the mostly disinterested green-eyed vixen.

When the lively Leprechaun alights briefly on Reels 1 and 5 at the exact same time it activates a Pick Me Bonus where you can pick for an instant prize. And now smile a smile for me.