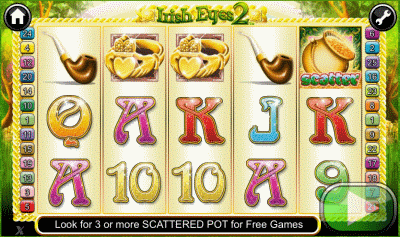 NextGen Gaming liked its Celtic-themed Irish Eyes mobile slots game enough to re-visit the theme and put a little effort into the presentation rather than toss a bunch of Irish memes into a mixer and just shoot them onto reels.

Irish Eyes 2 is still a five-reel game that pays along 25 paylines. The wagering range still goes after a wide array of players with a minimum stake of 0.01 coins this time up to a maximum of 2.00 coins per line. There is no progressive jackpot at play but there are bonus games and free spins. Autoplay and Max Bet are available.

This time out of the box NextGen made the graphics department at least put an afternoon into the project. The most important change from the original Irish Eyes was actually heeding the theme and giving the red-haired vixen a beguiling come-hither look rather than the distant apathetic gaze she projected in the previous game. Gone too is the stock, whiskered representation of a Leprechaun and in his stead is a jaunty hat. Also the yellow brick road that was ripped out of L. Frank Baum’s imagination as the pathway to the Emerald City, not the Emerald Isle, has been rightfully jettisoned. The shamrock and the pot of gold have both been spruced up and the minor playing symbols got a little make-over. Now, was that so difficult?

All of the major symbols have new roles to play in the sequel. The Lady has taken over as the Wild and the Pot of Gold has been elevated to Scatter, sending the Leprechaun Hat from Wild back to a supporting player. This is Irish Eyes, after all.

Other than shuffling the icons and boosting the Bonus from 12 spins to 20, Irish Eyes 2 plays out exactly as its predecessor did. The Pot of Gold Scatter triggers that spree of free plays when it shows up three or more times anywhere from left to right. Everything pays triple during the free spins and they can trigger again.

The Lady delivers the biggest jackpot in the game with a 5,000 coin prize when she appears five times on an active payline. And she substitutes for all other symbols in her role as Wild, bringing ever more winning combinations to your bank. When the Lady castes her eyes from Reels 1 and 5 at the exact same time it rolls out a Pick Me Bonus that yields an instant prize. Kiss me, I’m Irish.