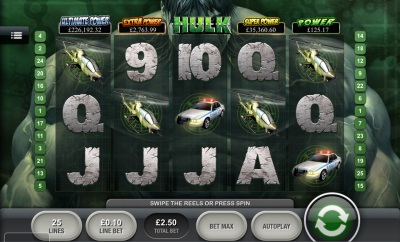 Hulk is one of the most iconic movie characters of all time. We were particularly excited when this series was announced by PlayTech that they would be releasing it on a mobile device. For those of you unaware, this slot will follow the excursions of The Incredible Hulk in easily one of the most popular online slots over the last decade or so.

The slot consists of a 5 reel, 25 payline structures but the highlight of it has to be in the number of features. You can play a range of expanded wilds, scatters, free spins, a smash bonus and a linked progressive jackpot, of which we will discuss at length later in the article.

We assume that the majority of you are more than aware who The Incredible Hulk is or at least what it’s about, so we will spare you the details of it all. The slot runs at a fittingly fast pace which sees a lengthy amount of terror and destruction as you work your way through all the bonus games.

Graphically, Hulk is one of the best we have seen, but then we wouldn’t have expected anything less from Marvel to be honest. One thing we would want to give you the heads up on is the fact that the slot could price out a fair few punters before even starting with its minimum bet of 25 coins. This means it will be targeted at the ‘higher rollers’ amongst you, which is a massive shame for such a popular movie franchise, although something we have come to expect from Marvel.

Where to start? Well, the most common feature comes in the form of the Smash Bonus, which requires you to get a smash symbol on both the 1st and 5th reel. From here you will be taken into a pretty simple pick and click game where at first you select from a number of police cars for Hulk to smash up before then revealing a chunk of money under each. After that, the army helicopters are next to tangle with Hulk and this will give you a multiplier of between 2x and 6x the cumulative amount of you have won.

The next in terms of frequency is the wild of Hulk himself in the middle of the third reel. It’s pretty simple, but what this does is give you two free spins, whilst Hulk acts as a wild throughout the whole third reel making it a much more likely you will make a combination. As an addition to this, you can get the Hulk symbol on reel 3, 4 and 5 to make a serious amount of money. This works in the same way except you get three reels that are wild, instead of one.