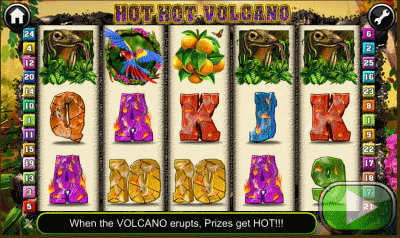 In case you didn’t grasp the full meaning inherent in this mobile slots game’s title from NextGen Gaming, this is one hot volcano. Like other magma-based slots the excitement in Hot Hot Volcano is waiting for the mountain to blow.

This a five-reel game that pays on 25 win lines. You can bet one coin on each payline with a maximum jackpot of 500 coins. There is no progressive jackpot.

We are basically thrust into an harmonious jungle scene. Monkeys swing from the trees, fruit is plentiful and the serpents about don’t seem particularly menacing. There is no presence of a volcano, save for some wisps of white smoke rising in the distance. None of the jungle residents seems concerned although apparently this volcano has erupted in the past because the minor playing card symbols have been chopped out of colourful magma. The jungle sounds make everything seem normal enough.

The Volcano makes its appearance on the reels as the Wild symbol. And also the Scatter symbol. Even then its looming destruction is reserved for Reels 2, 3 and 4. As the Wild it substitutes for all other symbols.

The jungle calm is only shattered when three Volcano symbols appear. Immediately the volcano erupts, filling the centre reel with molten lava and making it entirely wild. For the next five spins the reel remains wild while the volcano continues to rumble and spewing Wilds across the reels. Only after the eruption ends do the reels settle down. There has been no multiplier during the commotion.

As chaos reigns there are other in-game jackpots to pursue. The Lizard surrenders the 500X multiplier by appearing five times across a single win line. The Bird of Paradise returns 250X and the Monkey 200X. You can always gamble any wins on the turn of a card – double for the colour and 4X for calling the correct suit. You can continue gambling your winnings as many as five times.

If you have banked any money you can collect and retreat from the once-again placid jungle. Until the next eruption from Hot Hot Volcano.