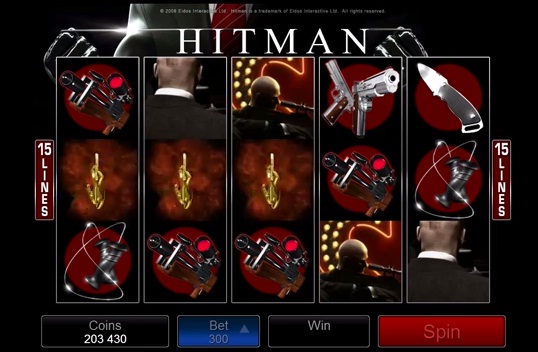 If you thought this was just another slots game about Indian cricket star Rohit Sharma you have not been paying attention to your video game library. Microgaming brought the successful video game series and movie to the slots world back in 2008 and in 2014 has put the adventures of Agent 47 into your hand.

Hitman is a five-reel slots game that gives you a chance to win across 15 paylines. you can take on the contract for as little as 0.01 coins and wager up to 5.00 coins per payline for a maximum wager of 75.00 coins. There is no progressive jackpot but there are free spins and multipliers to be tracked down and taken out.

Agent 47 makes his living snuffing the lives out of folks as a professional hitman. He was born to be a killer and raised to be an assassin by the shadowy group called simply “The Organisation.” In his line of work it is hard to keep all your business inside definable lines and so the Hitman finds himself running from fellow killers in both the Russian military and Interpol. If you put Timothy Olyphant’s face to the Hitman from the movie put it out of your mind because the actor is not getting paid royalties from Microgaming and the permutations of the Hitman in the slots game are indefinable. The tools of his trade are very much recognisable – a lethal syringe, a rifle with sniper scope, a garrotte, a wide-bladed knife, handguns and of course the pay envelope that normally contains large amounts of unmarked bills rather than Barclays bank drafts. And the Hitman never takes on a job unless it involves appropriately sinister music.

Agent 47 with pistols crossed is the Wild and if he lands on Reels 2, 3, and 4 they expand to fill the reel and strike even more winning combinations, punctuated by an animated Hitman.

The Contract Bonus is activated when three green Laptop Computers land on Reels 3, 4 and 5, bringing with it a chance to win 270,000 coins. You select one of five potential targets with a range of bonus values that have been multiplied by the total bet staked. On selection of a target a mystery value is awarded. After picking out a suitable weapon to dispatch your contract you are transported to a new screen where a random multiplier up to 6X is assigned as your pay scale. The total amount you bank is the original target value multiplies by the random multiplier.

Three Hitman Insignia will trigger the Insignia Bonus that is a Pick Me game that will deliver a multiplier to your prize. Free Spins come when three 18+ Cinema Proofs are presented. The award is 18 free games during which all wins are doubled. And cricket did not enter the picture once, unless there was a contract issued for a certain player.