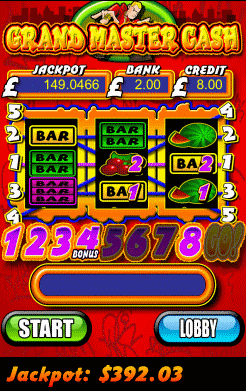 For those expecting a hip-hop mobile slots game or even one based on the Irish comedy film The Grandmaster Cash Story parodying the hip hop lifestyle, you will be disappointed. Instead the Grand Master Cash as delivered from Alchemy Bet is more of a mercenary figure. But for those wanting big wins from the game in your hand there will be no disappointment.

Grand Master Cash is a three-reel slot game of the classic one-armed bandit mode but gives the player five ways to win instead of one. Play can begin with as small as take as 0.25 and go as high as 5.00 units per line. There is a progressive jackpot that can be won regardless of what your initial stake is.

Grand Master Cash is a shadowy figure. You never really get a good look at him – or a good shot if you happen to be a sniper. But he’s keeping an eye on you from behind logos and titles. The game play is courtesy of classic Vegas casino symbols – cherries, watermelons, bars and sevens.

Grand Master Cash features nine step levels and if you light up all nine on the screen you trigger the bullet-riddle Cash Blaster feature where you unload your weapon into a grid of targets featuring multipliers up to 20X to pad your bankroll. Should you collect three Grand Master Cash pot icons you will be granted entry into to mega feature where even more random prizes and jackpot cash pots are stored.

On your way to the Cash Blaster bonus at Level 4 you are awarded a special game of Hi or Lo that plays out across three reels with the potential for even more coins. And there is always the progressive jackpot to be won – it happens when three Jackpot symbols line up across an active payline. You will even have to put down your weapon to carry off that many coins.