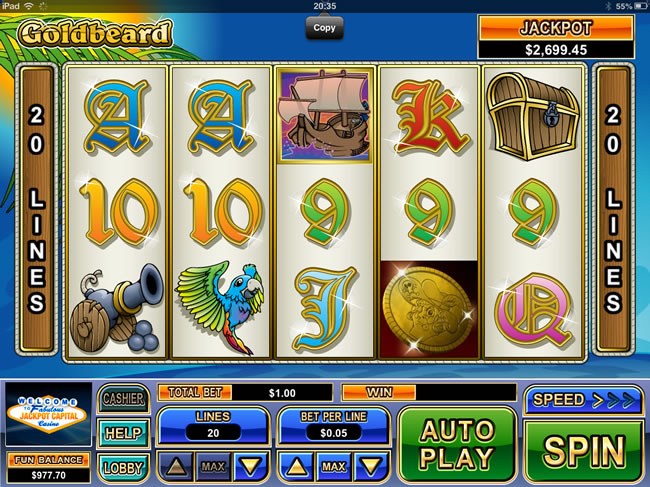 Edward Teach’s origin story is unknown but he came to the attention of history in 1717 when he captured a French trading vessel and armed her with 40 cannon. He renamed his ship Queen Anne’s Revenge and took to pirating. His fearsome countenance and thick dark beard won him the nickname Blackbeard and he quickly became a pirate leader along the eastern coast of the American colonies. Contrary to romanticised accounts Blackbeard was never known to murder or even harm anyone. He is said to have used his fierce appearance to scuttle treasure ships rather than cannon fire. Real Time Gaming’s mobile slots game Goldbeard adheres more to the legend than the historical accuracy.

Goldbeard is a five-reel mobile slots game that can score winning plays along 20 pay lines. You can set sail for just 0.01 coins and wager as many as 5.00 coins per payline so as much as £100.00 can be riding on any one spin in your hand. There is an Auto Play feature to keep the reels spinning. A progressive jackpot can be won at the conclusion of any game. It is triggered at random and wins are added to any prior prizes.

This slots game carries a pirate theme but the action takes place on a tropical island and not on the high seas. Symbols are kept simple and pull the most familiar elements from a pirate’s life into the slot. Besides Goldbeard you have a parrot, cannon, sailing ship, treasure chest and gold coins.

Goldbeard is the Wild and he only comes out of hiding on Reels 1 and 5. But he makes his presence felt swiftly by substituting for all the other symbols except the Gold Coin Scatter to try and form winning combinations on your behalf and stacking on the reels if need be. If he is successful he will also double your winnings.

If the crafty Goldbeard appears on both Reel 1 and Reel 5 each will reveal a hidden treasure of 2, 3 or 4 games. During this bonus play Goldbeard will also appear on Reel 3. If the pirate comes back on Reels 1 and 5 during the free play he will re-trigger the bonus up to a maximum of 24 games. All wins are tripled during the free games.

The Pirate Ship rules the waves and the pay table. A fleet of five across an active payline will score 2500X your stake and if you make four ships with Goldbeard the jackpot is 5,000X your initial bet. Shiver me timbers!