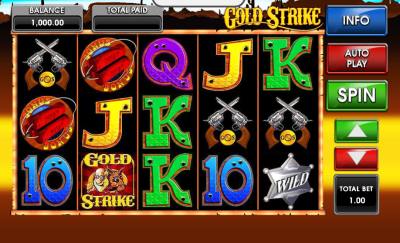 Mobile slots players can relate to the bigger-than-life dreams of gold prospectors from the American West in the middle of the 19th century. And that gold fever is what Barcrest captures with Gold Strike, one of the first classic slot machines the game company brought from the pubs to the online world.

Gold Strike is a five-reel slots game with 20 paylines. There is no progressive game feature but with multipliers and bonuses you can still walk away feeling like you discovered the mother lode. Once you navigate the game’s Lucky Strike map with the happy bearded prospector and his mule you could very well be agreeing that “there is gold in them thar hills!”

Nothing stirs the imagination of risk takers and adventurers like a gold strike. The game appropriates all the images of the Old West from the barren desert landscape to rusty tin cans used for shooting practice. There are sheriff badges and six-shooters and plenty of TNT and dynamite on hand to disgorge that gold from the rocks. If hunting for gold weren’t gamble enough, playing cards are never far from the action.

Finding gold is never easy. In Gold Strike you are searching for a mine three levels deep. Even before you start a gold hunt you must decide how much you want to risk. A gamble feature offered before the game provides the chance to “Gamble All Wins” when activated. You do have the option of disabling the gamble feature and settling down to the task at hand.

You start winning whenever three or more symbols match on a payline. If three or more Dynamite scatter symbols appear anywhere on the screen you win as well. This is one time the Sheriff’s Badge is a welcome sight – it serves as the wild symbol to stand in for everything but the Dynamite. Any reel win guides you to the Lock “N” Load feature where winning symbols lock in place while the reels keep spinning to hopefully bring even greater riches.

To really get on the trail of gold, however, you need to see six or more Dynamite scatter symbols on screen. This will lead the wary gold hunter into Tin Can Alley where a prize awaits under each of five dented and bullet-ridden cans. Find a Lucky Strike symbol under your can and you can almost smell the gold. The Lucky Strike Bonus is the coveted prospector’s map broken into 20 squares. Most conceal an “X” that ends the bonus. But some Lucky Strikes are hidden in the grid as well. A Lucky Strike means you have finally arrived at your destination: the gold mine. Select a detonator on one of the piles of TNT to blow the doors off and determine your prize. Eureka!