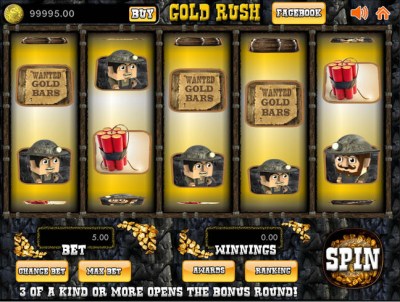 Every developer needs a game based on the possibility of striking it rich in the gold fields in its line-up of slots game and Gold Rush does that duty for Probability. Playing is as simple as swinging your pick axe into a rock pile and hoping gold coins spew out.

Gold Rush is a five-reel game with gold coins waiting on 25 paylines. Wagering begins at 0.01 units and can go as high as 1.00 unit. There is no progressive jackpot.

The Gold Rush in the American West as seen by Probability is a euphemism for the Old West where the hunt for treasure is an excuse to hunt Indians behind the tin shield of the law. So in this clip art game we have bullets, a Native American with glazed over eyes, a Sheriff Star, a cactus to portray the entire West and a bag of gold. Look up “generic lesser value symbols in a slots game” on Google and the icons from Gold Rush are what will pop out.

There is only one feature beyond the payouts in basic play. That comes courtesy of the Saguaro Cactus, the sentinel of the Sonoran desert. The Cactus acts as the Scatter and three or more will bring Free spins. Three symbols for six, four symbols for eight and five symbols for ten, to be precise. Awards are not multiplied and they can not be re-triggered. That is the Gold Rush.