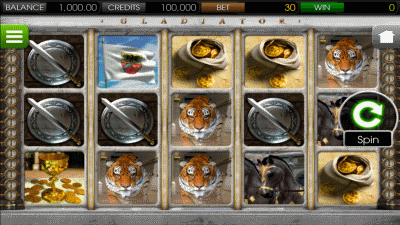 “In the glory days of Rome only the bravest of men stood to fight in the arena.” So says BetSoft Gaming in introducing their mobile slots game, Gladiator.

This is a five-reel game that rewards the strongest, most agile and skilful players on 30 paylines. These gladiators are fighting for the glory of Rome and maybe a little swag – there is no progressive jackpot, no massive in-app prizes not even any free game awards.

Gladiator is about man on man battle at its basest form. Or man on tiger, as the case may be. The setting is the Coliseum in ancient Rome. You get armoured heroes, noble steeds, bewitching princesses, some gilded swords and plenty of gold coins. Cascading waterfalls of gold coins. Symbols step off their reels to announce bonus games, animated gladiators are about to shatter things and wins are announced by trumpets.

As to be expected in a battle between gladiators this is a fair fight – no Wild symbols for anyone to gain an unfair advantage. As you are fighting in the centre of an open arena and must be aware of danger in every direction Gladiator pays both ways for lines of matching symbols, from left to right and right to left.

There are bonus games to test your strength of character and wit and they arrive often so a true gladiator can never rest. When the Princess deigns to make an appearance on the top row she favours those below her with a stream of rose petals turning the entire reel wild. The Princess also doubles any wins.

The Gladiator has the same power but only when he lands on Reel 3. He leaps into action smashing the entire centre spinner and making it wild. But alas, the Gladiator has strength but no powers – he does not add a multiplier to your winnings.

The suspense in the arena builds as the Gladiator awaits his opponent. You play a part in the reveal when three or more Coliseum Door symbols appear anywhere on screen. You click on the doors until you hit “Collect” and cash out.

The spectacle is engaged when the Gladiator, Anti-Hero and Coliseum all arrive consecutively on a payline on Reels 2, 3, 4 or 5. You trail the participants to the Battle Bonus where you select a combatant. The better your man performs, the larger your bank swells.

When the husky-throated narrator intones that only “the strong and brave shall enter to win unimaginable wealth” he is speaking truth – there is plenty going on in the arena but with no massive jackpots there is really no way to exit the Gladiator game Coliseum with wealth.